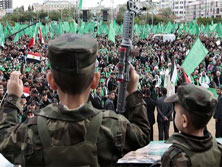 Haniyeh says inaugural academy in Gaza Strip will prepare children as young as 12 years old for “liberating Palestine,” establish Palestinian state “from the river to the sea”; more than 10,000 kids attend military parade.

The story went on to say how Hamas is planning to establish a military academy in the Gaza Strip for training and educating schoolchildren. Hamas Prime Minister Ismail Haniyeh announced Thursday that the new military academy, the first of its kind in the Gaza Strip, would prepare the children for the “phase of liberating Palestine. He said that children in grades 7-9 could join the academy and graduate with a Diploma or Bachelor of Arts in military affairs.

He said that he has instructed the Hamas-run Ministry of Education to lay plans for the establishment of the military academy. Haniyeh said that the new academy would educate and prepare children for the establishment of a Palestinian state “from the river to the sea.”
The decision to establish a military academy follows Hamas’s announcement that it would create its own “Defense Ministry” in the Gaza Strip. The announcement was made shortly after the IDF’s Pillars of Defense Operation in the Gaza Strip last November.

This is a sad story, to think that between the ages of twelve and fourteen you are being trained to be the next generation of terrorists. These children are being taught to hate, to fight, to kill and to die.

It reminded of a song in the musical South Pacific that Lieutenant Cable sings; the words go like this…

Golda Meir once said “Peace will come when the Arabs will love their children more than they hate us.” In light of stories like this one it is sad to say that it does not look like that will be happening anytime soon.