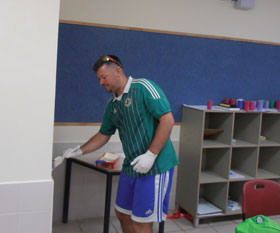 I have been to Sderot on a number of occasions and had the privilege of volunteering with Stewart Ganulin and his amazing team at Hope for Sderot. Stewart is a selfless man and one of the most talented, generous and humble individuals I have had the pleasure to meet. There is no one better to lead the Hope for Sderot ammuta and a true legend in the city which has borne the brunt of the Kassams from Gaza since 2005 and become the Rocket / Bomb shelter capital of the world. In summer 2014 I arrived during the latest Gaza operation.

I am from Northern Ireland and was brought up during worst years of the troubles there. For this reason I can totally emphasise with these brave residents and I admire their robustness and bravery in the constant onslaught. I became familiar with their daily routine of checking where the closest bomb shelter is before they do anything or carry out the simplest of tasks. I saw how they planned what to the world is a routine task of going to shops with children and deciding mentally which child they would gather up first if there was a Tseva Adom alert. I witnessed what people called the impact of Post-Traumatic Stress Disorder which is really Cumulative Stress Disorder for the residents of Sderot. However they are some of the most caring, pleasant and decent people I have had the pleasure to meet – not to mention bravest and most resilient.

I feel a certain connection with this special city and a great love and admiration for their resilience. I had no trepidation in coming to volunteer with Hope for Sderot and for working with the remarkable Stewart and his new wife, lifelong Sderotian Eti who devotion to the residents of Sderot is only matched by that of her husband. They are actually it must be said a great team in the kitchen as well, Stewart is on starter and mains and Eti makes the most effortlessly amazing cakes. I think the soldiers based around Sderot at this time must have put on weight with all the wonderful food this pair brought to them during Operation Protective Edge.

It must be said I did feel an uneasy atmosphere 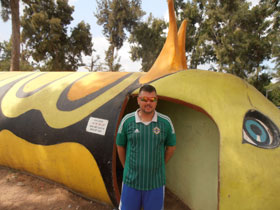 in Sderot during this time, that despite the city having witnessed much more heavy rocket fire during some previous visits. The city was quite deserted particularly after darkness and I often went down to the city centre to show some solidarity with the locals. During these evenings I witnessed some amazing acts of kindness and solidarity with the young soldiers of Israel.

In the bakery cookies, borekas and cakes were given to soldiers, pizzas ordered in the pizzeria were free also and despite having no customers most of the day, stayed open fixing the phones of the Chayalim for free – a precious act when contact with loved ones is so important at that dangerous time. Often this business, SuperFone had only one or two customers all day but he drove the thirty kilometres or so to a warzone to provide this important service. Only in Sderot would this happen!!

Upon arrival Stewart brought me to the Machsan and to my horror there was no food to pack, it was a truly sad sight. For only a few dollars a month one can ensure HFS can provide some essential items of food to ensure the brave residents of Sderot can eat.
After the initial shock I was curious what my task would be, it was painting a local school which had no funding from local council. Some might say this is a very tedious task. The cleaners had also been withdrawn in a cost-cutting exercise and meanwhile the remarkable Eti was doing the job of the cleaning staff for free ably helped by Stewart and hindered slightly by my inept cleaning skills perhaps.

It was a very humbling experience and a privilege to be able to meet the remarkable children. They could not believe that somebody from Northern Ireland would come to help paint their school. They brought their equally curious teachers to meet this crazy Ulsterman and I began to look forward to my daily impromptu Hebrew/English lessons with young students. The young girls would procure me some pita and chocolate spread from kitchen and come question me about anything from the weather in Ireland to why I was here in Sderot. The school depends on HFS for this act of kindness and cleaning as the mayor has to prioritize his funds. Stewart later was able to provide some food to the pupils as well. 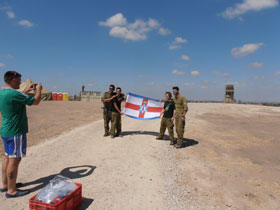 One of the mornings as me and Stewart travelled the short trip from his home to the school we has four Tseva Adoms. We made our way to the bomb shelter next to the infamous SDEROKET one. As we repeatedly tried to leave there was another alert. This became a tried and tested tactic by the terrorists to try to elude the Kippat Barzel (IRON DOME) defence system.

I want to note a few things, firstly the timing of the attack was when children were on way to school and parents to work, secondly as a result of the fourth and final rocket which eluded iron dome a house was hit in Sderot and a massive chunk taken out of the wall. A gas pipe was severed but miraculously didn’t ignite as the family head passed his enfant child out of the smoke filled home and thirdly the random makeup of those who found themselves in the bomb shelter that day.

There was of course myself, an Irishman far from home, a brave resident of Sderot, Stewart, three female medical staff working in the area and 4 Arab construction workers. I remarked as they cowered in the shelter, “your brothers are trying to kill you!”, ….his response, “they are no brothers of mine, Israel provides all I need for me and my family”
On another funny occasion, myself and Stewart were inspecting a well-known landmark in Sderot, the concrete caterpillar situated beside the main Sderot Chabad centre. As we talked and took photos there was a Tseva Adom alert and we were forced to run inside to cover!!!

For Shabbat I helped Stewart and Eti prepare food for the Chayalim guarding the Iron Dome Defence System on the outskirts of Sderot and they were treated to one of Eti’s famous cakes. The posed for pictures and I gave one young soldier a flag of half Northern Ireland and Israel. I hope he will look at it and think back of his time in Sderot and that he will have a long and blessed life.

It was very special and humbling experience to talk with the young children and teachers who live, study and work in Sderot under constant threat. On one occasion Ben and Jerrys came to the school and gave the children free ice cream and gifts. This summer school was supposed to take place 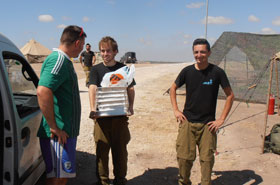 at outdoor locations around Sderot but as the school was in itself a massive bomb shelter and with smaller shelters scattered throughout the playground the education board relocated it to there for safety purposes.

I had the great pleasure of meeting the former mayor of Sderot at a NIFI event in Belfast where I talked of my time in Sderot. He knows Stewart very well and his offices look out over the HFS office. I asked him to be supportive where possible and he told me of his foresight to fight for bomb shelters in every home in Sderot with a view that when Hamasrockets go further and further at least Sderot has the necessary protection to encourage potential new residents , a plan which bears fruitarian today as building reaches a new high and a brand new mall and railway station grace the entrance of Sderot. This is a result of the resident’s resilience in the face of a constant onslaught of rockets for ten year.

It may sound like bravado but I never felt frightened or scared but I felt only pride and privilege having the chance to show solidarity with these remarkable people. I stand beside them shoulder to shoulder and I urge the world to stand beside them. I felt only pride to be there and if people find that unbelievable they should go and feel the spirit of these brave people you will understand. Nobody would stand so tall and so staunch having 12000 rockets fired at them. I urge everyone to support the work of Hope for Sderot and its great team, no matter how big or small financially, physically or otherwise.