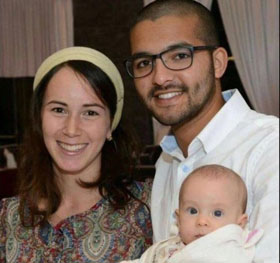 This story is from the Jerusalem Post. It may give you an idea of life in Israel. This story is played out everyday.

At his funeral in Jerusalem early Friday morning, his wife Yael, described how they had been in another part of the store with their infant daughter Netta when the teenagers pulled out knives.

“You are a true hero. You didn’t have a gun, but still you ran [toward the attackers] without thinking twice,” said Yael in a tear filled voice, as she stood by her husband’s freshly filled grave in the Mt. Herzl Military Cemetery.

“I always knew that if something happened you would be the first person to respond,” Yael said.

Her husband of almost two years, who she called by his middle name of “Yanai” had been a combat sergeant in the IDF’s Nahal Brigade. He was only able to be with his family on weekends.

“Yesterday we went shopping so that when you returned to the army on Sunday you would know that Netta and I had everything we needed and that nothing was missing.

At times, as she stood at the podium, she cried so hard it was difficult for her to speak, particularly as she recalled their last moments in the Sha’are Binyamin industrial park outside of Jerusalem, where Rami Levy is located.

“We came to the supermarket. We were together. You were worried the whole time about Netta and made sure she stayed close to me.

“Then in one moment, everything happened. We heard there had been a stabbing and even though you did not have any weapons on you, you ran to help without thinking twice.

“We waited a long time and you did not return,” she said.

“People, who were as amazing as you were in thinking about others before themselves, helped me find you,” said Yael.

“I was not able to stop you and I am not sorry. If you had not raced there [to help], you would not be the Yanai that I know, the one I fell in love with.”

Tuvia Yanai had been stabbed in the upper part of his body as he tried to disarm the two 14-year old Palestinians who had come to the store from Betunyia, the nearby suburb of Ramallah were they lived.

Another shopper with a gun, shot and wounded the two teenagers, who are now being treated in two Jerusalem’s medical centers; Sha’are Tzedek and Hadassah Ein Karem.

Tuvia Yanai was also evacuated to Hadass Mount Scopus, where doctors tried to save his life for a number of hours, but the injuries were to severe.

An Israeli shopper who had been wounded by the terrorists was released on Friday from the Hadassah Medical Center on Mt. Scopus.

Yael told the hundreds of mourners who crowded around her at Friday’s funeral of the special relationship she had with her husband, who she had known for seven years first as a friend and then as the love of her life.

“Yanai, my beloved, who would believe that I would sit and write to you when you were no longer with me.

“That I would not be able to show you the letter, so that you could add it to our collection of correspondence,” Yael said.

“Our love was a very special thing. It didn’t matter how much we disagreed with each other or argued, we always did it respectfully,” she said.

The time he spent in the army away their home in the settlement of Ma’aleh Michmas each week had been hard, she said.

“Before we left for the store I hugged you and asked, ‘so, when will we be together like a normal family?’

“We were waiting for your release from the army.

We had so many plans. To fly, to trek, to work, to study, and most important of all, to be together,” Yael said.

Her husband was so focused and directed in his short life, that it was almost as if some part of him already knew how little time he had, she said.

“I want to thank you for every moment that we were together,” she said.

“Thank you for the best present you could have given me, our daughter Netta. I couldn’t ask for something more perfect. I promise that Neta will know who you were and how much you loved her. We will never part from you. You will always be with me. Even if I am not with you physically, we will to be apart.”

“Give me the strength to look Neta in the eyes and tell her that everything will be fine. I promise to take care of her as best I can. I am sorry that we did not have a chance to realize our dreams.

“I love you and I already long for you,” Yael said.