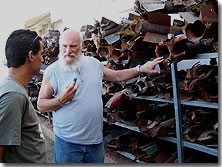 Its one thing to leave everyone and everything you have known for the past 56 years and move lock stock and barrel to a different town, but when the town is thirteen thousand miles away and it holds the worlds record for rockets fired into by Hamas terrorists, that a whole different story.

You may ask “Why would you do that.”  There are some things in life that to the human mind make no scene and can only be understood by that still small voice inside. That voice that you know you are doing and going where you must go and accomplish what G-D has set in front of you to do. So you go.

Sderot reminds me a lot of California in as much as the house have yards, some with grass, red tile roofs, palm trees and some wide open spaces. There is a great deal of farm land all around Sderot. When you drive down the highway if you didn’t know where you were you would think you were in the Sacramento Valley; even the temperature is similar to San Diego.

What Sderot has that San Diego doesn’t have is a neighboring town that wants to wipe all that live here off the face of the map. Aside from that it is a wonderful place to live. It’s that still small voice leads me to a group of people who have been injured by Kassam rockets. Some have lost their sight, some body parts, some their children, all innocent victims of terror.

“Tseva Adom” (Code Red) two months  and 140 rockets ago was a strange word to me.  “Tseva Adom” in Hebrew means “Code Red” and that is what is heard form the public address system here in Sderot. Today it means you have fifteen seconds to find cover because a rocket has been launched by terrorist in the Gaza Strip. What is it like to live with “Tseva Adom”? For those of you who have served in the military it would be comparable to “In Coming”; I need not explain any further for you. For the rest… When you walk down the street you are always looking for the next bomb shelter or a stair way to duck into. There are those places where there are no bomb shelters or stair ways and you are just out in the open; your always looking, you’re always aware of the danger.

I was a volunteer Fireman for thirteen years. During that time I always carried a pager with me and it was by my bed at night, when you heard that first “Beep Beep Beep” you were up and moving. Today when at three in the morning you here “Tseva Adom, Tseva Adom” I find my self once again up and moving, to the safe room in my apartment. For you mothers who remember what it was like to here your babies cry in the middle of the night and you were up to see what was wrong, you can relate to this; you almost slept for the first few years with one ear open at night.

When the dog next door barks and he sounds just like the first sound of “Tseva Adom” you jump a bit. I find weather I am in Sderot or Jerusalem when you hear certain sounds; they get your undivided attention!

Thanks be to G-D relatively few people have died, but even one is one to many! Many times you hear on the news here that rockets were fired but no one was injured… but thats not a true picture. There are children who have been born here in Sderot and have lived all their lives with “Tseva Adom”. There are others who remember what it was like before “Tseva Adom.” No one my be getting physically injured with every “Tseva Adom” with ever ‘Boom” but the spirit is being killed a bit, the nerves are pinched, that seven year old wound is once again opened up one more time.

Hope for Sderot is a humanitarian organization, bringing hope to the people of Sderot through a personal relationship with their L-RD G-D, reminding them that He loves them; that they can find hope and peace in Him and through the support we are able to bring them through your generosity. G-D has asked us to come here, to become one with them and one of them if He so wills, So we will serve Him as we serve them.