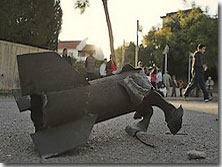 The barrage of terrorist rockets from the Gaza strip continued to fall on the town of Sderot and her surrounding areas. In the last week alone some seventy five rockets have been fired. The fact that most of these rockets have not caused death or serious injuries is a blessing one resident of Sderot said. “It seems that G-D has His hand on us and protects us in ways that our government can’t”.
Even tough there was no physical damage; the mental damage continues to mount. Knowing that the cease fire is coming to an end, knowing that at any minute you may here “Tseva Adom”,

the IDF warned residents of communities near Gaza to remain as close as possible to fortified rooms, and police and rescue services announced they were raising their alert level in preparation for more attacks.
A rocket struck an electrical pole near a Sderot home, sending several people into shock, including a schoolchild. As a result of the recent rocket attaches, all the border crossings with Gaza  remained closed to deliveries of fuel and other essentials on Friday.
The United Nations and the European Union are quick to condemn the boarder closers. UN Secretary-General Ban Ki-Moon said that Israel’s response to the incessant firing of rockets from the Gaza Strip, in which crossings to the area were closed, was “unacceptable.”
EU External Relations Commissioner Benita Ferrero-Waldner said she was worried that “fuel and basic humanitarian assistance” is not reaching the Palestinians.
Oxfam, a group of non-governmental organizations from three continents working worldwide to fight poverty and injustice called on the state to end “the blockade” of the Strip. “World leaders must step up and exercise all their political might to break the blockade of Gaza,” a statement released by the  organization said.
“Where is the outcry from these organizations against the daily Kassam rockets being fired on innocent  men and woman, boys and girls” Avigdor Avshalom, a resident of Sderot asks; “Where is the condemnation of the Hamas terrorist organization firing these missiles at us”