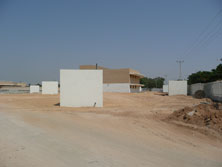 School starts this week, just like in the states. With old, unsafe schools and class rooms, Sderot Schools and local government officials have been requesting funding to build a new school complex for some time now. Money has been tight and it has taken some time to finally get this project underway; just like in the States.

School here and even the pupils are very much alike, that is with a few exceptions. Down the middle of this complex there is a fence… the boys on one side and the girls on the other. The religious philosophy is: if you keep the sexes separated there are less distractions and a less likelihood for young men to have a wondering eye and sexual thoughts.

Unlike in the States, Torah is taught in all public schools, there is no separation between “church and state” in that respect. Biblical values and principals are part of the every day curriculum.

One of the many facets of Torah, besides being the word of G-D to the Children of Israel, is that it also contains the history of the children of Israel. I guess you could say the Torah is also a history book as well.

King David said it this way, “Wherewithal shall a young man cleanse his way? by taking heed thereto according to thy word… Thy word have I hid in mine heart, that I might not sin against thee.”

Oh the children of Israel today are not perfect in any stretch of the imagination, but the one thing they have going for them that other children in public school miss out on, is the word of G-D is being planted in them daily. With that planting, with that teaching, comes the promise of G-D “Train up a child in the way he should go: and when he is old, he will not depart from it.”

The most major difference between schools in Israel and the States is… if you look at the picture again you will notice a few things. For one thing, there are no windows on the west and east sides the class rooms, why? When a Kassam rocket explodes it often blows out the windows in the area where it landed. The windows on the south side have a three quarter inch thick piece of steel shutter that is closed when “Tseva Adom” is sounded.

The second thing you will notice are the little buildings all over the school grounds; on the boy’s side there are eight, what are they? They are the bomb shelters. When you have that many kids in one place you need to keep them safe from terrorists and their Kassam rockets they fire from Gaza.

What you don’t see is the roof of the school that is forty centimeters thick (about two feet); that is how thick it needs to be to prevent a Kassam from penetrating it. Over crowding, issues of “church and state”, budget cut backs, all the things that schools in the States will face this coming school year, pale in comparison to the fears of a parent here in Sderot as they hope their children will survive the next Kassam rocket fired toward their children.