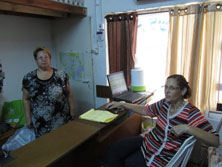 Thursday is food delivery day. Each week we load up the beat up old van with food packages for the families and the elderly who are unable to pick theirs up. After deliveries were done we headed back to the moxson to prepare lunch for our Israeli volunteers. The rest of Thursday afternoon was clearly orchestrated by Ha’Shem.

While at the nearby hardware store, we met an Israeli lady who needed some help getting an oversized item back home. As she was being assisted into the van, she was speaking to me in Hebrew, of which I was only able to understand a few words. Basically she was trying to tell us that she recognized us from Tuesday morning’s meal delivery to Enosh. After getting her home, we returned back to the moxson with a flyer she had given us.

Apparently, she had been the victim of a recent assault and robbery. Her adult son was also a victim; he had been very severely beaten in the incident. The son who was already 75% disabled following injuries sustained while serving as a soldier was now 100% disabled. And she was 75% disabled from her injuries.

We also learned that earlier that day, while we were delivering packages, she had been to the moxson requesting help. So when the work was finished for the day, we asked Eti to come along with us to help interpret, and went to the woman’s home to let her know we would be adding her to the list of families we help each week.

As we arrived, she opened the door to us but was obviously nervous about disturbing her son who was in his room with very loud music playing. She invited us to sit at the tiny kitchen table, and so we did. She then brought a handful of papers and spread them out on the table before us. The papers, some from doctors, some from social services told the story of what had happen. She then brought out two boxes of medication which I recognized immediately as a long acting injectable antipsychotic. Almost immediately, I was able to fill in the gaps in the story.

Her son, who at this point was still in his room, had suffered severe head trauma not once but twice. Those two incidences had left him with extreme mood and personality changes that now required medication to control. What occurred next required no interpreter to give understanding.

Her son came out of his room and was loud and very agitated. You didn’t need to speak Hebrew to understand he was angry and wanted us to leave. I am thankful for Ha’Shem’s hand of protection. I knew He had brought us there and that He would also safely get us out of there. We stood to leave but wanted the woman to also follow us outside. She had obviously cowered at her son’s rage because she had experienced it before when the verbal rage had turned physical. 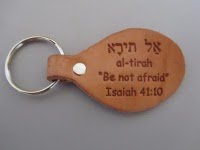 We walked outside with the woman, and with Eti’s help as an interpreter, learned that her son wasn’t always like this. It was only after the head trauma that he had become violent. We wanted to spend more time with her as she was now in tears, but with her son still upstairs yelling we didn’t want to make things worse for her.

I am always amazed at Ha’shem’s ability to use us here to declare His love, and comfort to His people despite our language limitations and shortcomings. How do you share Ha’Shem’s comfort with someone who is distraught and fearful when you don’t even speak their language? You pull out of your pocket a leather keychain that came all the way from California… a keychain that declares;
al-tirah
“Be not afraid”
Isaiah 41:10

You could see her able find some comfort as she was able to read the Hebrew words, al-tirah…“Be not afraid” in her own language. And I was yet once again able to experience the handiwork of Ha’Shem and to realize that He orchestrated the entire encounter as far back as when He first spoke to me in that still small voice; ”Fear not, it is I.”

Worst One Day Attack EVER