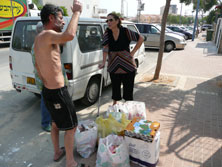 It seemed odd that just two hours before Shabbat began that I would see a fire engine outside my living room window taking on water. Why would they be doing that at this time… that’s odd?

Well Shabbat came and went and it was a wonderful time of rest… I never did get out of my pajamas! Around nine o’clock after Shabbat ended I got a phone call from Yael. She told me of a family whose apartment had caught on fire and she was wondering if we could help them with some food. We said yes, and she said she would get back to me with the details.

The contents of their home were a total loss, Mikahel sustained burns to his hand as he was getting his wife and four kids out of their home. Yael also told me that they lived somewhere in my neighborhood, which explained the fire engine I saw before Shabbat.

The next day we went to the moxson and loaded up six bags of food and we also made a stop at the market to pick up some perishable items as well. We delivered the food to Mikahel brother’s house, who has four kids as well; that makes a total of twelve in the home for how long… Don’t know.

The city is willing to pay for temporary housing for Mikahel and his family but presently there are no places available. It seems that with all the bomb shelters that are being built in town by out of the area contractors that most of available homes have been rented to house their construction crews, the balance of rentals are taken by college students that go to Sapir college here in Sderot.

We bumped into Mikahel just outside the Moxon the other day. He thanked us again for the help we gave to him and his family. The next day I saw him again, across the street from where I live. He pointed to the third floor of the apartment that is a stones throw from mine and said “Ani bit” (my home). We are neighbors and didn’t even know it.

It will be months before the fire damage is repaired. Replacing the contents will be a whole other story and may take a long time to replace all the furniture and appliances they lost. Fire insurance is a luxury few can afford here in Sderot. We were able to help a bit and will continue to help them where and whenever possible until they are moved back in and up and running.