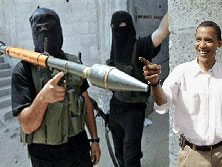 “The Obama administration is looking for ways to build up “moderate elements” within Hezballah and to diminish the influence of hard-liners, Reuters reported John Brennan, assistant to the president for homeland security and counterterrorism saying Tuesday.”

How do you “build up” the “moderate element” of an enemy of Israel and still say you are there to support Israeli security? The 1985 mission statement referred to the Lebanese Christian leader as a “butcher,” and called for the destruction of Israel and the imposition of Islamic law in Lebanon. Today, Hezbollah’s military might is a source of great controversy in Lebanon and across the Middle East. But over the years the party has played an increasingly active role in politics as well—Hezbollah now has two ministers in the Lebanese Cabinet and ten members of Parliament.

For some time, there have been suggestions that the vehemence of the original statement was obsolete. In the early nineteen-nineties, Hezbollah quietly revised their slogan from “The Islamic Revolution in Lebanon,” to “The Islamic Resistance in Lebanon.”
In a recent speech Nasrallah, the Secretary General of Hezbollah, made no reference to an Islamic revolution. His speech was designed to appease his Lebanese political opponents, and called for the end of sectarianism in the country; Terrorism has no legitimacy but “resistance” is legitimate.
Concerning Israel, Nasrallah said, “Our problem with them is not because they are Jewish. Our problem is because they have taken over Palestine.” Nasrallah was also clear in his military intentions.

“The history of the Arab-Israeli conflict proves that armed struggle and military resistance is the best way of ending the occupation,” he went on to say, “We categorically reject any compromise with Israel or recognizing its legitimacy.”

Nothing in the Hezbollah manifesto has changed. The destruction of the State of Israel and the imposition of Islamic law is still its main objective… And now the Obama wants to build up “moderate elements” within Hezballah.

Why would you want to build up even a moderate enemy of Israel? Will they only moderately send Katyusha rockets into Israel or moderately kidnap Israeli soldiers and send their bodies home to Israel in exchange of moderate terrorists?