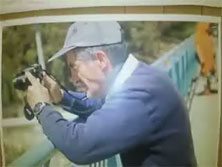 Shasha is one of the forty or so people we deliver a brunch meal to every other week at Enosh. Through occupational therapy, the goal of Enosh is to train and in some cases to retrain these men and woman to function in society. Some have lived their lives with emotional problems and some are a result of living in Sderot and being in constant fear of the next Kassam.

Enosh has two facilities here in Sderot. One of the facilities is in a bomb shelter and the other is a converted house with an attached bomb shelter. Their hope is to move into a new facility what will be big enough to house all forty clients under one roof.

Shasha rolls balls of material that will be used to make crocheted rugs; while others work at various ceramic projects, jewelry making, or a variety of art projects. All their handmade work is sold at their store here in town. In addition to the many crafts they produce, some outside businesses use the people of Enosh for packaging small items like washers nuts and bolts.

When we were first asked to help with food, the request was for a daily meal. As it turned out, to date we are only able to provide a meal every other week. We are however, ok with that because when we drive up to deliver the food it is a special occasion for us all.

In the beginning we were not aware of the second facility so we had just been delivering food to the one, until this month. We were told that some of the food we brought was being taken to the second facility. On more than one occasion we were asked if we could make the meal a bit “more humble”. Our response was that, “what we do, we do first unto
G-D” so the table that was set for them was in reality set before G-D and how could we do any less.

The meals are not all that elaborate… maybe four different salads, tuna, pita, humus, pickles and olives, things like that. So secondly why shouldn’t these people be blessed every now and then with something special? The cost of the meal for both facilities runs about two hundred and fifty shekels or about $70 per week… they don’t ask us that any more!

The first time we delivered food to the second facility is when we first meet Shasha. As we set the buffet table he told us through a translator that he went to bed hungry the night before and G-D spoke to him and told him not to worry that he would eat well tomorrow; Shasha had no idea we were coming, But G-D did!

Needless to say, he went on to explain that when he saw the food and had his fill that he said he “ate like a king.” It is something to be part of an answer to prayer and to be used to be a blessing to people that would normally go without.