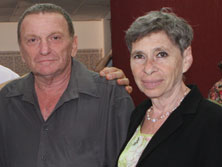 Since our last update a lot has happened, but the thing that made the biggest impression was the loss of one of our volunteers. Tally and Yefeem have been coming in each week faithfully for the past four years and have packed bag after bag… somewhere in the neighborhood of 16,000 of them.

Yefeem a victim of a Kassam rocket attack comes in each week with the aid of a crutch; sets it in the corner and limps back and forth as he fills bag after bag of food to be given out each week. Tally his wife was always right there on the other side of the table packing bag for bag with Yefeem.

Tally suffered a stroke which she never recovered from and a few days later she passed away.

The past few weeks have been hard for us and I can’t imagine the pain Yefeem is going through after losing his wife of 45 years. He told me that after the morning period is over he wants to come back and once again pack bag.

We have been looking forward to his return next month but were surprise to get a phone call from him this morning asking if I would come and pick him up because he wanted to come in and help.

The day was bitter sweet and came with tears. You could see the toll of the loss of his Tally has taken on his life in just this short time. Yet he wanted to come in and be with his Hope For Sderot family.

Hope For Sderot started out by giving out food to those in need. Our volunteers came from the very same people we helped. They come to give back and through their volunteering a relationship between all of us grew into the family we are today.

As we help 450 families each month we are helping ourselves and each other. This too is made possible through and because of your love and support… “Thank You”!

From the very beginning Hope For Sderot has been a meeting place for traumatized people to come for support. It was through that need that we became a family.