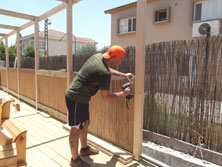 Sometimes people that come to volunteer with us come back, but for the most part volunteer come for a period and we never see them again. Even though we may not see them again, but the work they have done, the fingerprints they have left will always be seen and remembered and appreciated.

I remember in the very beginning of Hope For Sderot that trip to the hardware store when I met Gershon. He had just finished volunteering with Sarel, a organization that attaches volunteers to the IDF where they do the mundane jobs which leave valuable time for the solders to train.

To this day I can’t look at the sign on our window or walk into the kitchen to see the work He did. In Fact today As I was doing some work I was using the tools he left behind for us.

Stephen came to volunteer with us the first time the day of our Hanukah party in 2011. No sooner did he walk in the door and we put him to work manning one of the games. He has come back three more time since then and every time he comes we are in the middle of a project. This time was no exception!

From painting three rooms for Daisy to helping us build a pergola and for koby; Like I said this time was no exception.

He had a week before he too went to Sarel to volunteer with the IDF. Little did he know that we were once again in the middle of a deck and pergola project when he arrived. I told him what we were doing but also told him that if he would rather relax before Sarel please feel free do so… But that’s no Stephen.

At work at 8:30, He cut and drilled, screwed and hammered in what was probably the hottest week we have had so far this summer. When He gets done with Sarel he plans to come back for a few days to help us pack food for next delivery day.