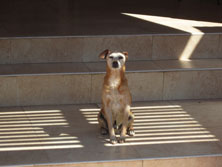 Rocky is 7 years old. Four years ago he was out in the yard doing all the thing a dog does. Tseva Adom sounded and everyone ran for their bomb shelters, that is all except Rocky.

As Shimon and his family counted off the fifteen seconds there was no explosion so they left the bomb shelter. Rocky came running back into the house and  everyone went back to doing what they were doing before the alarm.

Shimon and Rocky were in the kitchen getting something to eat when a Kassam ripped through the kitchen wall. Shimon’s left arm was laid open by flying glass and shrapnel. On the ground next to him was Rocky. Shrapnel had hit him in the head and he also was in a pool of blood.

Shimon was rushed to the hospital where his arm was put back together as best as possible and Rocky was off to the vet to see what could be done to save him. Over the past twelve years there have been several dogs that have been killed by Kassams as well as cattle and horses at Kibbutz Nir Am.

Both survived the terrorist attack but for both Shimon and Rocky life has never been the same since. Shimon lost the use of his left arm so the days of being a welded are over and he is now on disability.

The Vet could not take the Shrapnel out of Rocky’s head because the metal was lodged between his eyes and there was a chance that if they had operated he would have been blind, so he lives with the metal in his head just like so many other victims of these terrorist attacks live with shrapnel still in their bodies.

Rocky’s life like Shimon’s has changed forever. He is skittish, He jumps at loud noises, has facial twitches and he looks for more attention than before his injury. Today he is afraid to go outside and when he hears “Tseva Adom” now he runs to the bomb shelter just like everyone else here in Sderot.