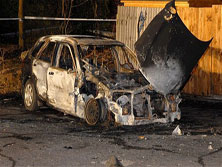 Monday night’s news read like this…
“Palestinians fired a Kassam rocket from the Gaza Strip into southern Israel Monday night. The rocket exploded in an open field in the Sha’ar Hanegev region. No injuries were reported. The Color Red rocket warning system was heard in surrounding towns. Security forces were searching for the exploded rocket.”

Let me share with you a little about this rocket attach. I was sitting in my car at the time Tseva Adom sounded. The engine was running and my foot was on the break. I reached over to release my seat belt but it sticks from time to time… this was one of those times. And now my fifteen seconds was now down to ten seconds before impact.

The transmission was in neutral so when I turned off the engine it started to roll backwards. By the time I got the cars parking break set I was down to six seconds left to find shelter.

The Tseva Adom alarm had stopped sounding by now and the person I am with was yelling at me “Lets go” the only problem now is, it is dark and I can’t find the door handle.

My fifteen seconds were up before I could get out of the car tonight. The only thought I had in my mind while all this was going on was “there’s nothing I can do”.

At the same time Eti was going through her own her own issues. You see five years ago she was in a car when she heard the “Tseva Adom” alarm go off. They didn’t get out of the car  but they did pull the car over. Maybe 30 seconds later there was a second “Tseva Adom” alarm. They were by a bomb shelter and decided to get out this time and run to the shelter.

A few seconds later there was the hellacious explosion. When they got out of the bomb shelter to see where the Kassam had landed, their car was gone, the Kassam hit their car, it took a direct hit.

With the shortness of breath she was still experiencing an hour and a half after this attack, she looked at me and said “the Kassam did good”.

So when I read “No injuries were reported” I see red and could spit bullets. There was no innocent blood spilled on the street and no body part to be picked up tonight but for the people of Sderot this twelve year old wound was re-opened tonight as it is every time we hear “Tseva Adom”.