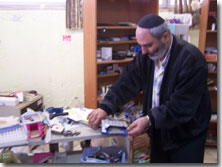 For five years, Shalom owned a store here in Sderot, it would be comparable to a Dollar Store. It was a store that the residents of Sderot appreciated having. Business was good enough to provide for his family and have just enough to make ends meet by month end. No excess though. November 9, 2006 that all changed.

In days past when he heard “Tseva Adom”, the resulting bombings were always far away. This rocket called a Grad (much bigger than a Kassam) landed less than three feet from his front door. In the few seconds from the“Tseva Adom” until the blast, Shalom had a customer in his store who was leaving, Shalom told
him to stay as he grabbed him by the collar back into the store. At the same time, there were two elderly ladies outside his store panicking wondering which way to run. Shalom yelled to them to come into his store as well.

The blast blew out all fifteen windows in the store and cracked the forty centimeter (16 Inch) thick wall. Miraculously, no one was killed. Shalom recounts that just that morning he had just put a mezuzah on one of his stores two door (As commanded in Deuteronomy 6). His cash register was closest to the door that had the mezuzah on it. His calculator was destroyed by flying debris. He showed us some pieces from the rocket that fell next to him where he was using his calculator.

He has recovered from his internal injuries, but he did lose his hearing in his right ear, which was closest to the blast.

When he finally went outside to see where the rocket had landed it was then he realized how close it was to his store. It landed exactly where the two ladies were standing and where his other customer would have been as well. Needles to say, Shalom saw G-D’s hand in the situation.

The store is still in shambles. He took us to his store yesterday. It’s the first time he’s been back to it.

Since then, six months ago, there was a rocket attack near his home. His three-month- pregnant wife lost her baby from the panic and noise of the rocket.

Shalom was one of our guests at the Hanukah party two weeks ago. As with all we visit, we asked him how we can help him and his family. His answer was much like all the people we have met. Financially, he has been devastated. One day he was able to make ends meet and now he only receives 1500 shekels ($450) a month from the government. The fate of his shop is still in bureaucratic red tape and the debt is mounting. Post dated checks (they still do that here in Israel) started to bounce, automatic payments went unpaid. He has been turned over for collection and has only twenty days to come up with four thousand shekels to keep them from coming to his home and start taking his possessions. He is also faced with his electricity being shut of.

We can help with one or the other but not both and in a few weeks we will help with their food bill so they can use that money to keep the lights on, but until then Shalom and wife and four children not only sit in fear and anxiety but may be sitting in the dark. If you would like to help Shalom, Click here