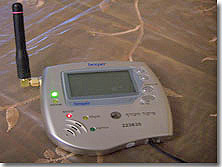 Day five of the war brought rockets to Beer Sheva. In spite of the attacks of Hamas on innocent woman and children of Israel G-Ds hand remains. Last night around eleven o’clock the first of two rockets were fired on Beer Sheva. They this a kindergarten what was empty and no one sufferer physical injuries’. That attack prompted the mayor of Beer Sheva to close the public schools today. This morning when classrooms would have been filled with children a rocket slammed into the roof of a school, again no one suffered physical injuries.
Hamas’s striking range is now forty kilometers. That now puts
some seven hundred thousand people at risk.  Israel is constantly being slammed by the international media fr the action they are taking against Hamas. The sad thing is they aren’t reporting that Israel gave them warning after warning to stop their attacks on innocent Israeli people. Also lost in the news is the fact that Israel left the Gaze to give the Palestinians that place for their own and what did they do with it… they turned it into a haven for terrorists and rocket making factories.

The international community is now asking Israel and Hamas to halt their activities. Like I have said before cease fire to the Hamas is an occasion to re-stock and re-arm and that is the concern of the people of Sderot. During the past six month cease fire, (if you could call it that) that took the opportunity to build bigger and stronger rocket; the result of that cease fire in now being felt in Ashdod, Ashkelon, Kiryat Gat and now Beer Sheva. If the Hamas is given an opportunity to restock under the guise of a “cease fire” they will welcome it. And use the time to their advantage. Hamas has reportedly boosted as saying they can launch sixty rockets at one time do you want to  give then the opportunity for a revenge barrage of rockets? That is the concern of the people of sderot today.

It has been raining all morning long, making life all the more miserable for the Israeli forces stationed on the Israel/ Gaza border. In days past rain also detrude the Hamas from firing Kassams into Sderot, but this morning was a different story. Solders have been going door to door installing  pagers that sound a early warning  “BEEP” in addition to the public broadcasted “Tseva Adom” If you could harness the adrenalin flowing constantly in the bodies of the citizens of Sderot and now Beer Sheva, you could probably have enough electricity to light California.