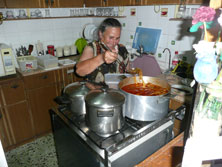 Daisy moved to Sderot, Israel in 1954 from France. She was 19 years old and had been married for only six months before the move. Sderot in 1954 was a city of tents and makeshift homes. Within her first year they moved into their first and only house in Sderot. It cost 6000 Lirot. Her home was small with only a bathroom, kitchen and one bedroom

She remembers Sderot as a small town with no running water in homes but rather a central well where everyone came to draw their daily water needs. The grocery truck would drive down the dirt roads weekly to bring food to the town.

Eli her husband worked raising chickens. Later on Daisy became a cook at one of the local schools; she also cleaned the school at day’s end as well. In between hauling water, cooking and cleaning Daisy and Eli raised a family of six children; three boys and three girls. Today five of her children live in Sderot. Her son Victor died when he was eighteen.

Just last year Daisy lost her husband of fifty-five years, needless to say this past year has been hard for her. When asked what medical problems do you have, with a smile on her face she replied, “What don’t I have?” Today she suffers from heart problems, high blood pressure, back problems and diabetes.

She remembers Sderot when there were no Kassam rockets being fired at it and “Tseva Adom” was never heard. The windows in her home have been blown out on several occasions from the concussion of exploding Kassams; thank G-D her home has never been hit directly.

Her husband had just been laid to rest, and as friends and family gathered to “sit Shiva” (the seven days Israeli mourning period) “Tseva Adom” sounded. The Kassam exploded just four doors down the street. The added stress was just too much for her as she collapsed to the floor.

Today Daisy makes three kilos (six pounds) of couscous every Friday afternoon for her kids. Walking slow and with a limp she goes back and forth with dishes of couscous as she piles on top the chicken and vegetables. It was not hard to see it was a labor of love. Her five kids and seventeen grand children come and go all afternoon before Shabbat; some sit and eat; some take containers home for dinner that night. It is a family tradition and a tasty one at that.

The lines on her face tell the story of her life but the smile in her face outshines every line.