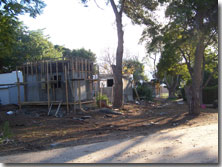 This article was written a week before the war in Gaza began. The hope was to finish the building of the bomb shelters before this war broke out – it did not happen. Now they will be finished under fire. The IDF is using the fields of Nir Am as a staging for their tanks.

Nir Am Kibbutz lies just across Highway 32 from the city of Sderot. It lies on the Gaza Israel border. From Gaza to the center of the kibbutz where all people of Nir Am live is only two and a half kilometers (1.55 miles). In recent months, there has been a building boom (no pun intended) as they build one hundred and fifty six
new bomb shelters, one for each home. The walls are approximately sixteen inches thick; the roof is twenty four inches thick and the windows have a piece of one inch plate steal that covers them. They have the ability to close off the outside air supply and have their own air filtering system inside incase of a chemical attack as well.

The inside area of each bomb shelter depends on the size of the family. Each shelter has electric, internet and cable connections in them. You see, these shelters are designed not just for the family to run to when they hear “Tseva Adom”, like the bus stop bomb shelters through out all of Sderot. These bomb shelters are big enough for the household to live in. It will be cramped but you can still get two sets of bunk beds inside.

It is not only the Kassams they are worried about but the “Big war” they know that is coming. They have been told by the government to keep water and nonperishable food items on hand for three months, along with a radio in the shelters.

To date, there have been four hundred Kassams landed on Nir Am. Itzak, the construction manager, has one hundred men working on the project and hopes to have all the bomb shelters completed in two months. One of the many challenges he has faced is that before the foundations can be laid – the existing underground sewer, water and electric lines first have to be moved.

In the past eight years people living on the Kibbutz have been killed and injured by Kassam rockets as well as livestock and building destroyed. It is their hope to protect the residents of Kibbutz Nir Am as best as possible.