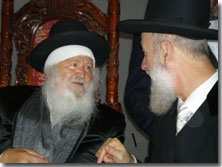 Rabbi Levy said , “It is well known that our enemies arise against us due to our sins,” he reminded the crowd. “By each and every one of us doing deep, heartfelt repentance, we can uproot and cancel the harsh decree. Through fervently praying with all of our souls, begging G-d to forgive us for the sins which have brought this cruel enemy upon us, we can influence the situation on the ground. Just as the united prayers of the Jewish people have brought us rain, so too they can save us from the present danger.”
“You don’t have to be a prophet to see the increasing sympathy for Hamas on the part of the Arabs in Israel. Danger threatens us

from without and within.”
Rabbi Leon said that every Jew had to enlist in the fight. “Those of us who are not in the army must become spiritual soldiers with the same day-and-night spirit of sacrifice and sense of duty as our boys in uniform. It is our prayers that give fuel to our fighter planes and tanks and direct our missiles on course.”

Rabbi Leon listed several spiritual offensives: In our battle against the Hamas, the Jewish people in Israel must unite by judging all Jews in a scale of merit, even blatant sinners. Even those who seem to transgress unwittingly out of compulsion, because of a lack of Jewish education and the cultural pollution of the times, we must view them with love and judge them favorably, the Rabbi urged.
He also called upon students to increase supplications for salvation, including the tearful nightly recital of “Tikun Hatzot,” the special midnight lament.
Especially important, he emphasized, was the upcoming “Shovavim” period, when for six weeks congregations will gather all over Israel for special prayers, called “Tikun HaYesod,” over sexual transgressions.