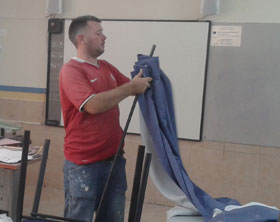 We have the opportunity and privilege of written many stories about people who have come to Sderot and made a difference in our lives. Over the years we have written a few stories about Stephen, our friend from Northern Ireland. Stephen has always showed up on our doorstep when we have needed help the most, and this time was no exception.

We has just agreed to paint ten of the classroom at the school; that happened on a Wednesday. On Thursday Stephen dropped me an email telling me he was in Israel and wanted to know if I needed any help, he had 2 ½ week he could help if we had something for him to do… Boy was he in for a surprise!

He came down right after Shabbat and for the next 2 ½ weeks he cut carpet off wall, scrapped wall, re-plastered wall, sanded and painted molding, painted the classroom and he must have drilled honestly over 1000 holes in the cement wall in order to install the molding. 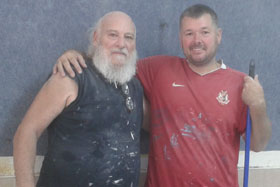 After the first classroom was finished we knew what needed to be done and he went from classroom to classroom while I repaired the ceilings and worked in two offices downstairs.

It was hot, it was dusty and the work was wasn’t easy. The amazing thing was, Stephen did it all with a smile on his face! By the time his 2 ½ weeks were over he had single handily finished seven of the ten classroom! I felt quite confident that I could finish the rest in the eight weeks we had before the new school year began.

After he left the scope of the project grew by two hallways, the computer lab, the library in addition to the remaining three classrooms and how I wished he was still around to help! Needless to say it all got done on time, except the library. Without his help this major undertaking would have been impossible… THANK YOU Stephen!!!