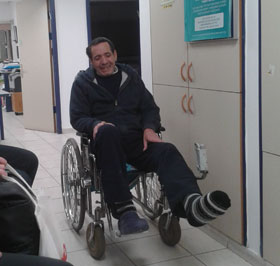 Back in November of last year we told you about Moti, one of our volunteers and how he was hit by a car on the way home from work. At the time the police were not sure if it was a terrorist attack of a case of hit and run.

Since then Moti had to undergo surgery one more time, which once again put him back into bed for a few more weeks. He spent months in rehab and physical therapy and little by little he is up on his feet.

It was a wonderful surprise to see him last month as we were packing food for Passover. He came and spent the day with us and joined us for lunch, he even packed a few bags too! 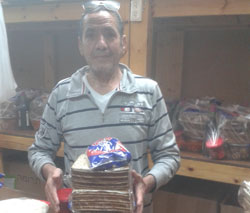 He is still not back at work which is causing a financial hardship on his family. It’s now going on eight months without a pay check and what he gets from the government is just enough to starve on, no less being able to keep current with the household bill.

We will try to help him but even we are limited to what we can do without your help. If you would like to help Moti get back on his feet financially while he works on getting back on his feet physical, just click here to help.