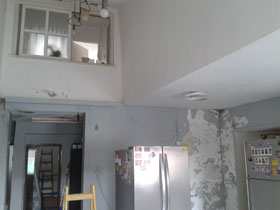 One of the projects we have been working on was a non-stopped race to complete a home repair before Passover began. We no sooner completed last home repair, then we were called on to step in and complete a repair job started by another group that could not finish a job they started.

Aliza and Shalomo are both holocaust survivors and are both ill. Aliza is blind in one eye and losing her sight in the other, she also has other serious medical problems. Shalomo has cancer. Both have respiratory problems. 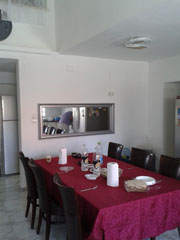 Mold was prominent in every room in the house and there was extensive ceiling and wall damage throughout the house. For the most part it was a solo repair job but I did have some help with the painting and some of the kitchen repairs, which was very welcomed.

We spent almost 6 weeks just re-plastering just about every wall in the house. At sixty five years old, and by the time I got home at night there just wasn’t any energy left, other than to take off my shoes and take a shower. 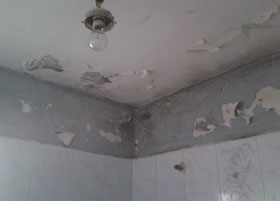 In between plastering, painting and making repairs we were also open to distribute Passover food, cook brunch for ENOSH and distribute cooked meals each day.

ALL of this is made possible by your love, care and generous support. From the people that received food for Passover from Hope For Sderot, or the hungry school children who eat because of you THANK YOU! Let me try to convey the thanks from Aliza and Shalomo.

By the pictures, you see what the house looked like. The wall repair 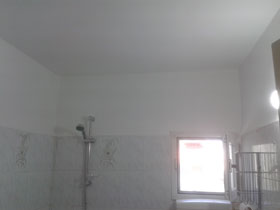 and painting was completed two days before Passover, so when their friends and family came home for Passover, Aliza took them to every room to see how beautiful her home had become. The smile on her face was worth every back pain, every cut and  every scrape.  She said “This more than I could have ever dreamed for.”

Though this Thank You is coming to you late it is just as full of my thanks and gratitude to you for your un-failing support… THANK YOU!!!