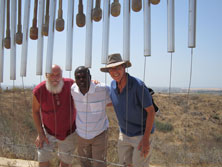 From time to time we have visitors and friends stop by to say hi and to encourage us. This week our friend from Beer’Sheva stopped by with Victor, who was born in Zambia and still lives there. We had time to share what the L-RD has been doing in Hope For Sderot and we got a chance to learn a little more about Victor.

This being his first trip to Israel it has been a very special time for him. As we talked one of the things that were amazing to him was the roads and highway system Israel has. It’s a far cry from the dirt roads that he is used to in Zambia. The amount of food we had on our shelves was also amazing to him.

When you come from a country that has a high infant mortality rate, close to one million people infected with HIV/AIDS, where fifty seven percent of the people live in slum conditions, there are hundreds of thousands of homeless “street kids”, an unemployment rate of over fourteen percent, and poverty and starvation is the norm, it is easy to see why a seven week supply of food for two hundred and eighty families just sitting on our shelves was overwhelming to him.

Our super markets here in Sderot have full shelves, you can still choose between twenty kinds of chips or eight different kinds of pickles and the meat counter is just as full as any in the States. Yet for many of the people of Zambia if you don’t grow your own food, more than likely you don’t eat. We see the poorest of the poor come through our doors for help and yet in reality, in the big picture of the world, we truly do live in a land flowing with milk and honey.

As some our Ethiopian brothers and sisters came in to pick up their food it caught Victor of guard. We explained to him that starting in November of 1984 with Operation Moses, Operation Joshua and Operation Solomon over 16,000 Ethiopian Jews were rescued from Africa. To that all he could say was, “I wish someone would have rescued us”.

Our guests had lunch with us and then we took them over to the Gaza border which is two miles from our Moxson, our storefront. It is something for guests to actually see where the rockets for the past eleven years have been fired from and to see it in perspective and first hand. While showing them the Sderot, Gaza border we let them know that we were within range of a bullet fired from an M-16.

It was a reality check for us and to realize even though we are among the poor here in Sderot, just how blessed we really are.