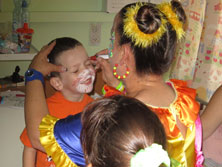 Since the inception of Hope For Sderot Ha’Shem has blessed the people of Sderot in many different ways but today for me was the epitome of all His blessings so far. This blessing started a few weeks ago when friends of ours came from Hawaii and Colorado with a suit case full of toys and candy.

Some of the toys went for our “war box” project, but the bulk of the toys and all the candy was divided up into fifty gift packages. After a few phone calls were made to the hospital in Ashkelon, a nurse we know here in Sderot and the clown that has put smiles on the faces of the children of Sderot at our Hanukah and Purim parties, the wheels were set in motion.

This past Sunday we packed up the car with the gift packages, a hand full of volunteers and we went up to Ashkelon to meet up with our clown and start making the rounds in the children’s ward of the hospital. Along with children from Sderot were also children from the surrounding area as well. 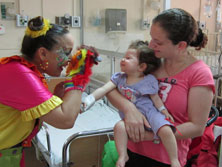 With a hundred or so filled balloons, fifty gift packages full of candy and toys, a bag full of tricks and a bag full of face paint we made our way through the open doors to the children’s ward. As we made our way passed the nurse’s station it didn’t take long before kids and parents alike were asking if we were going to visit them.

For the next three hours we went room by room, bed by bed, child by child, handing out the candy and toys that we were blessed with, as Morit the clown did magic tricks, painted faces, made balloon animals and put smiles on the faces of each of the children we met. 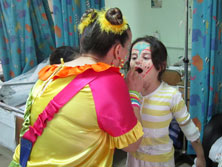 It is hard enough to be sick when you’re a child, but to have to be in the hospital for a child is even harder. The last time I was in a hospital in the States there was a TV in every room to help pass the time, granted that was six years ago and things might have changed since then. Ashkelon’s Barzilai Medical Center requires a deposit before they will send the cable guy in to install one. The days can be long for a sick child, not to mention their parents who are staying with them.

As we visited one of our little friends, her mother started to cry as Morit the clown and her hand puppet played with her; you see since she has been in the hospital Nirit hasn’t smiled… that is not until today.

After we had visited all the children we still had some balloons and candy left, so we did the only obvious thing to do, we went to other wards and put smiles on big kid’s faces (60’s is still a kid to me!) As we made our way through the cancer ward, the people there did not need a balloon or candy to make them smile, just the sight of the clown did that. 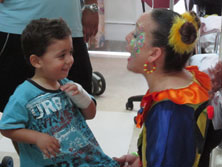 The last stop we made was to the maternity ward, not that the new born children were even aware of us, but their brothers and sisters that were there with mom were made to feel special as well.

There are many different types of “offering” mentioned in Torah that are offered up to Ha’Shem. Over the years we have heard many praise offerings offered up to Ha’Shem as we have delivered to His people what He has delivered to us. I have never read about a “Smile” offering and yet today I saw smiles on the faces of kids that I have to believe without a word ever being spoken were a sweet aroma unto our G-D and I believe it put a smile on His face as well. 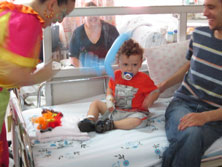 As always, all praise, glory, and honor goes to Elohim, Adonai, Ha’Shem. At the same time we must thank those whom Ha’Shem used to bring the toys and candy and those who support us to enable us to be able to afford the clown. To you all THANK YOU! Thank you for allowing us this wonderful day, this wonderful opportunity to see His children smile. Toda Raba.