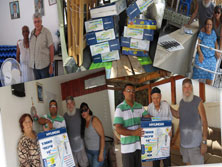 I met Avi almost two years ago. He helps aid a small community of people here in Sderot. Food and diapers are normally on the top of his list of needs for the people he serves.

The other day as I was driving home, I saw Avi walking down the street, so I stopped to say Shalom. He saw the new fan I had just purchased sitting on the passenger’s seat and said he needed fans to give to ten elderly people.

The temperature here this past week has been hot, ( hom in Hebrew). Well it is more than just hom it has been “hom gadol,” really hot or literally hot big. I told him I would see what we could do to help.

Baruch Ha’Shem, some one gave us a gift in honor of their wife this week and we could not think of a better way to honor this gift and the memory of this wife than to help Avi supply the fans that were so desperately needed for the health and well being of these seniors. With a trip to Danny at the hardware store, the order was placed and delivered to us on Thursday.

While most people in Sderot were just beginning to make preparations for Shabbat we were able to deliver the fans. Some of the elderly had crutches, some walkers; nine out of the ten were either widows or widowers; the tenth was a single mother. Some let us take their picture others were too embarrassed to be photographed.

Two of the people we delivered fans to already come to Hope For Sderot for food so it was a pleasant surprise for us when we saw them today and were able to help them stay cool this summer.

It was a wonderful way to end the work week and to begin Shabbat; as we heard one person after the other praise G-D for the gift they had received from Him. Once again we were blessed to see how Ha‘Shem supplied the way to fill a need for His children. It was also a reminder to us that we are indeed nothing more than the delivery boys, and girls of the L-RD G-D most high!