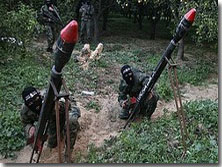 There were seven mortars fired from Gaze on Friday, on Monday Sderot had four (“Tseva Adom”) Kassams launched from Gaza directed at Sderot, just one day before the new school year was scheduled to start. Israel responder to the mortar and Kassam fire with air strikes by IAF on “smuggling tunnels”. One reported strike hit a tunnel one and a half kilometer from the Gaza Israeli border. The tunnel was believed, to be used by terrorists to perpetrate terrorist attacks on the people of Israel.

As the school year begins a report was just published that stated 17 schools that were scheduled to either be reinforced or replaced because they were not properly reinforced and could not properly protect the children attending school here in Sderot from a Kassam attach have not been completed and in six cases work has not even begun.

“The report is disturbing to say the least” Avagador Avshalom said after reading the report. “ this just adds to the already heavy stress level. To our friends in America, you have no idea what it is like to send your child out of the house in the morning, knowing they are going to a unsafe location to learn.”

At some schools bomb shelters, about the size of a average living room have been brought in and are being used for classrooms, that house up to twenty five students. There is three quarter inch thick steal plate over the never opened window. There is an air conditioner in the class rooms but as one teacher said “when you get twenty five sweating teen age boys in one class room its nor a nice smell”

Marko, one of our Hope For Sderot volunteers and the guard at the school will once again prepare sandwiches and provide drinks for those at his school that have nothing to eat for lunch and come to school without having eaten breakfast. And so a new school year begins with its normal challenges for the kids of Sderot.