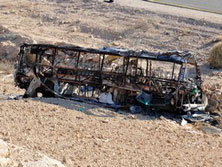 I thought that since much of what goes on here never makes it into the media there in the States that I would gather some of the headlines from the past 24 hours and send some links for clarity on the situation here. For those of you who are yet unaware of the recent terror attacks here, I will review the past 24 hours briefly.

On Thursday afternoon a coordinated terror attack was carried out on Israel citizens in southern town of Eilat. A group of terrorist who infiltrated from Gaza through the Sinai Peninsula opened fire on a city bus carrying civilians and IDF soldiers. A few minutes later another bus was fired upon followed by a suicide bomber blowing himself and the bus up also killing the bus driver.

The coordinated attack continued as civilian vehicles were then fired on. The female driver of one car was killed by gun fire, while the second vehicle carrying two sisters and their husbands was hit with an anti-tank missile followed by the attacker firing at the four Israelis at close range. 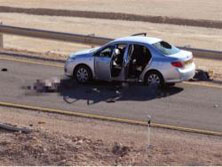 As evening came, the IDF responded to the attacks with strikes on targets in Gaza. We could hear the Israeli jets flying overhead at dinner Thursday night along with the sound of Israeli mortars hitting their targets in Gaza. As the evening and early morning hours passed several rockets and mortars from Gaza terrorist were fired back into Israel initiating the “Seva Adom” alarms here in Sderot as well as Be’er Sheva, Ashkelon, and Ashdod.

Grad rockets hitting Ashdod causes several injuries including someone being seriously injured. At this point an estimated 17 rockets and mortars have been fired into southern Israel from late Thursday to early morning Friday. The residents of the Negev and the south have been given new security instructions to stay close to protected buildings and not to make unnecessary journeys outside. 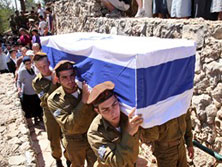 Please continue to remember us in prayer for Ha’Shem’s protective hand, for comfort to those injured and for the families that have lost loved one. That the hearts of those who lead Israel would be turned toward Ha’Shem and that they would be filled with Ha’Shem’s wisdom in their actions. For us, that we might be filled with strength, courage, and discernment in order that we may continue to serve Him with boldness.

Please feel free to forward any of this email to those you know who love Israel and would want to stand in the gap and support Israel with prayer.