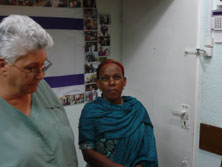 We have known Tzippy for quite some time know. In the past we were able to help her and at one time she was volunteering with us but that changed.

For many years she and her husband wanted children but were unable to have any. Though artificial insemination Tzippy did become pregnant and had a beautiful daughter.Her husband is a cabinet maker and opened up his own shop here in Sderot but with the years of terrorist rocket attacks and people moving out of town he was not able to sustain the business and he finally had to close the doors leaving a huge debt to pay off.

Unable to satisfy his obligations fast enough he was taken to court by his creditors and as a result their assets were seized still leaving them with over 100,000 shekels in debt. Michel went and got a job at a cabinet shop out of town to pay his debts and put food on the table… This is where we first met Tzippy and we began to help with food.

Like I said over the years she came to help us and became part of the Hope for Sderot family. Two years ago her daughter Galina turned twelve and we were invited to her Bat Mitzvah.

Tzippy had to go to work to help make ends meet and her days of helping us were limited and finally she just couldn’t spread herself any thinner and she had to stop come to help but she does stop by whenever she can.

Just last week she stopped by, her smile was gone as she told us about her daughter who has been having headaches for a while. She has seen the doctor and the x-rays show some type of growth on her brain.

An MRI has been ordered but Tzippy’s insurance will not cover the MRI plus they have ordered thirty different tests which her insurance covers, that is all but the thirty shekel co-pay. They have nothing to sell to pay for the MRI and is hard pressed to come up with the co-pay for the tests.

To add insult to injury Michel has suffered a heart attack and is unable to go back to work. If this is not bad enough Tzippys mother who lives with her is suffering from Alzheimer’s.

Keep in mind Tzippy is maybe four foot eight inches tall and can’t weigh more than ninety pounds soaking wet, yet on these shoulders rests the weight of supporting the family, taking care of her mother, her husband and now the added weight of her daughter.

I Am not sure how much more weight these little (but strong) shoulders can hold. If you would like to help Tzippy click here.