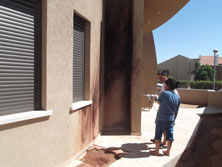 Last week started out like any other week except for a few differences. This was the week that President Obama would be making his first trip to Israel since he became president. Hopes and expectation filled the air with what might be and what would be said during his stay in Israel.

The second day of President Obama’s trip started for us here in Sderot at 7:15a.m. with the first “Tseva Adom” (Color Red) alarm being heard throughout the city. Within minutes the second alarm sounded, this one had an accompany “Boom” to it which shattered again the morning silence and the ceasefire since the end of the “Pillar of Cloud” operation in Gaza.

The second Kassam hit the house of Sarai Hazeze. At the time she was home with her 8 year old daughter. When the first “Tseva Adom sounded Lian was woken up from her sleep and made her way to the bomb shelter, something she has lived with all her life.

She went back to bed only to be startled again by the second “Tseva Adom”. This time she moseyed to the bomb shelter only to be knocked to the ground by the explosion that happened just outside the living room, injuring her leg and hip.

When Sarai’s son, who is presently serving in the IDF, heard from a friend that a Kassam had hit his home he immediately called his mom to make sure everyone was o.k. but he got no answer. Worried and concerned he went to his commanding officer to ask permission to go home, which he was granted.

Yarin came home to find his mother and little sister still crying and shaking you see this it is not the first time something has happened to the Hazeze family; in fact this is the third time a Kassam has hit their home!

There old home was hit twice. So last September they moved to their new home in Sderot. They have only been there six month and now this new home they live in has been hit.
We were called to ask if we could help them with food for Passover… and that is what we do… help people that have been injured by terrorist attacks for terrorists in Gaza.

We visited them three days after the attack. Sarai and her son were still visibly shaken as they showed me where the Kassam had hit. It missed the exterior wall by only inches and because the wall was fortified if did little damage to it but to this family it devastated them one more time.

Lian was not out and about when I came, in fact she has been spending most of her time lately in bed, can’t sleep at night, she is  afraid to get up and go out, again this is something this eight year old little girl should not  have  to live with all her life.

Her mom is hoping to get her a computer to help with the trauma she is going through. When rocket attacks are frequent kids don’t want to go out and parents don’t let their children out and computers are the only way some of the traumatized children in Sderot have any social expression.

In the past four years we have only been able to buy one computer but we are hoping that this will all change. If you would like to help you can do so my clicking here and noting the help is for Lian.