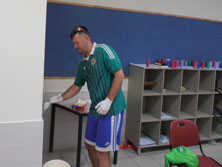 It seems every time we need help our friend Stephen from Northern Ireland shows up. He first came to Sderot in 2011. No sooner did we shake hands for the first time and he was manning one of the games set up for Hanukah that year.

He came back in 2012 just in time to help up build a pergola for Jacob who was severely injured by a Kassam and needed to shield his living room from the hot summer sun.

Both of these trip to Sderot came after he had spent three week with “Sar-El” – The National Project for Volunteers for Israel where he worked on an Israel Defense Forces (IDF) base performing non-combat civilian support duties such as packing medical supplies; repairing machinery and equipment; building fortifications; and cleaning, painting, and maintaining the base.

On trip three when he wasn’t pack food bags and delivering them he was helping us paint the interior of a home of one of the elderly we help each month. This Trip he has helped prepare salads for ENOSH as well as helping prepare Shabbat food for the solders that man the “Iron Dome” here in Sderot. It seems whatever we have to do or ask him to do he is right there taking care of it.

In the past he has experienced “Tseva Adom” but never like this time. We have run to the bomb shelter both inside and while we have been out driving; Yet he is still eager to help. In Fact he was scheduled to go home after two week but told me today he would like to stay another week to help. 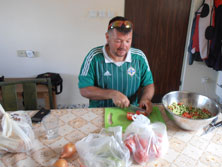 This past week we were painting one of the local schools. Money is tight for them and the city who is responsible for the maintenance is so far in the red that paint and laborers to paint is out of the question, so they called us to see if we could help. Like I said in the beginning of this story Stephen comes to us when we need the help the most. The school will be finished next week.

When the children come back to school in September they will come to a freshly painted school. The Principal is elated; the teachers are thankful and even the students that were there for summer school thanked us for painting their classrooms.