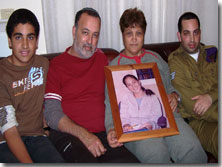 Jonathan and Sima have five children and live in a nice home here in Sderot.  Thier son, Tamir, is pictured on the left. They have everything you would want to find in a home, but they are missing one thing, Ela, their daughter. It was four years ago when Ela and Tamir were on their way home from a Torah lesson. When the kids heard “Tseva Adom”. They had no place to run for protection; they were out in the open.

Tamir, the younger of the two, fell to the ground (that is what you are told to do if you are caught out in the open during an attack). Ela laid on top of her younger brother to protect him from what

might be coming their way; that’s just what big sisters do.

Ela was hit by the flying shrapnel but Tamir was not. Ela was rushed to the hospital in critical condition. The doctors worked to try to save her life but by the next morning they had lost their battle and Jonathan and Sima had lost their 13 year old daughter.

Today Ela would have been 17 years old. Life has never been the same. Life for Jonathan, Sima and Temir has never nor will it ever be the same. They still find it hard to cope with the reality of the death of their daughter and still find it hard to get out, try to enjoy life or even to speak about it. With every Tseva Adom that comes, they once again relive that day when their lives were changed forever.