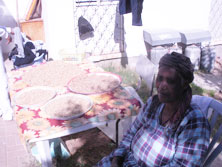 There are many people we have met and helped, Gena is one of them. She is the mother of four and up until the 29th of September 2004 was the grandmother of five. September the 29th “Tseva Adom” sounded as it has so many times before. In 2006 it sounded a total of 968 times as rockets and mortar shells were fired at Sderot.

Gena did not have a bomb shelter in her home at the time and in that part of Sderot where she lives, there was not any close by that she or anyone could have run to in fifteen seconds. Grandma was watching two of her grand children that day. Dorit 2 and Yuval Abeva 6 were in her front yard playing, just being kids.

Grandma could not it make to her grandchildren in time and they could not make it to the house in time either. The kassam that was fired by terrorists in Gaza reached its tender goal and it exploded killing both youngsters.

The children’s father Gabi assists us in getting food to those of the Ethiopian community that need it the most. He rarely speaks about that day when he lost his children. Grandma on the other hand has erected a memorial stone in her front yard in remembrance of her two young grand children. It serves as a daily reminder to the senseless death.

As we visit her each week we not only bring food but a smile and a hug. I often watch as hugs are exchanged and the kiss on the cheek is given and wonder whether it is the food she looks forward to more or the love she receives by our visit.