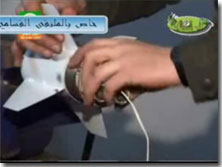 If you watch the news or read the newspaper, you know that Sderot is under attack once again. The weapon of choice comes from the skies. It is called the Kassam (or Qassam) rocket, and thousands of them have landing in Israel.
In America you have a certain mental image that appears whenever we hear the word “rocket.” You tend to think of something big, complex and expensive. We get that impression because we are used to seeing huge moon rockets or billion-dollar space shuttles flying precisely into orbit under the control of thousands of technicians.

The Palestinian Kassam rocket is just the opposite. It is small, simple and cheap. The idea is to create an easily manufactured, inexpensive weapon of terror that one or two people can launch from almost anywhere.
How can Palestinians manufacture rockets in their basements? The key is to think small and to use everyday items wherever possible. The Kassam rocket starts with a simple iron tube, like a a piece of pipe. In a Kassam rocket, the pipe is usually about 6 feet long and 6 or 7 inches in diameter. At one end of the piece of pipe you weld on four simple fins made of sheet metal. The sheet metal can come from anywhere – an old car fender will do.
Since this is a rocket, it needs some kind of rocket fuel inside the pipe. Palestinians use the simplest fuel possible. It is made of sugar and potassium nitrate, also known as saltpeter. The obvious question most people have is, “Sugar?” It turns out that sugar contains quite a lot of energy. You can see that energy when you are roasting marshmallows and one of them catches on fire.
The problem is that sugar does not burn fast enough to use it as a rocket fuel. The potassium nitrate solves that problem by providing an oxidizer that accelerates the reaction. In the United States, there is a whole category of model rocketry called “Candy Rockets.” American hobbyists hold competitions to see who can create the highest-flying sugar-powered rockets. The Palestinians have simply taken the hobby to an extreme.
Once you have filled your pipe with its sugar fuel, you need a nozzle for your rocket engine. In a Kassam rocket the designers use a round metal plate with seven holes drilled in it. Each hole is about an inch in diameter, because that is about as big as a standard drill bit can get. This round plate then screws onto the bottom of the rocket.

At the other end of the rocket is a small bomb. A Kassam rocket has a payload of 10 to 20 pounds and the bomb is very simple. It is made of a metal casing filled with an explosive like TNT. The TNT is probably the hardest material for the Palestinians to obtain, so they smuggle it in or harvest it from old military hardware. The shell of a rifle bullet acts as a blasting cap to initiate the TNT explosion.
When you put this all together, what you have is a rocket that can lob a 10 to 20 pound bomb through the air for a distance of five or six miles. It is very much like an artillery shell, with the advantage that you do not need a massive artillery piece to launch it. Instead, you need a couple of simple guide rails to act as a launch pad. You set up the rails, lean the rocket against them, light the fuse and stand back. 30 seconds later a 20-pound bomb explodes five miles away. By the time Israelis can react, the people who ignited the rocket can be long gone from the launch site.
Because they have no guidance system of any kind, Kassam rockets do have their limits. There is no way to know precisely where the rocket will land. However, as a tool of terror, that randomness can make the rocket very effective. The Germans employed the same tactic with the V-1 and V-2 rockets that they sent toward London during World War II.