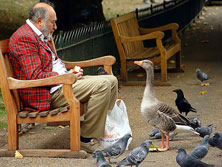 When the children of Israel were given manna in the desert, they were told not to go out on Shabbat to gather any manna because there would not be any; the bakery in heaven is closed on Shabbat.

Korach, throughout his life challenged Moses and his authority. So when Moses told the children of Israel not to go out on Shabbat to gather manna; what did Korach and his followers do? With their double portion they had gathered on Friday they went out late Friday night and spread it in the fields, in an attempt to discredit Moses; that is why you read in Ex 16:27 “And it came to pass, that there went out some of the people on the seventh day for to gather, and they found none.”

Well early in the morning, before the sun came up the birds came and ate the manna. When Korach and his boys got up they told the children of Israel to come and see the manna that was on the ground on Shabbat, to their surprise the manna was gone and Korach and the boys looked like fools.

By the birds coming and eating the manna they saved Moses from having to defend himself again against Korach. So today Jewish people instead of throwing out their stale bread will feed it to the birds on Friday in remembrance of what the birds did 3000 years ago.

O.K so what’s the point, what’s the moral of the story? When was the last time you did something for someone who could never pay you back or may never say thank you, for someone that had no idea why you were even doing something nice for them? You see the bird has no way to say thank you, he has no way to pay you back or even for that matter give you a pat on the back for what you have done for him.

If you leave with the thought that giving is for the birds, then sadly you have missed the point. If however you walk away with the knowledge that giving is between three people, you, the person you have given it to and G-D who will bless and reward you for it. Oh your name may not be in the paper and you may not have a certificate to hang on your wall, but if that is why I give then I am doing it for the wrong reason.

Maybe we need to go out this Friday afternoon and feed the birds, just a thought.