Since our last update we have had three ceasefires and one potential extension of the first one. Each and every one of them was broken by Hamas. The ceasefire over Shabbat ended at 8:00 P.M. that evening. By 8:03 P.M. Hamas had fired 4 rockets into Israel… I guess they said “no” to the extension… is that any surprise? In the eight hours after the first twelve hour cease fire ended some forty rockets were fired at Israel.

There have been six “Cease Fire’s” to date, all have either been broken by Hamas or ignored by Hamas. To date 48 IDF solders have been killed. The last five killed we 18, 18, 19,20 and 21; Just kids yet they gave their young lives to protect us from terrorists in Gaza as they were trying to infiltrate into Israel and slaughter as many innocent Israelis as possible. 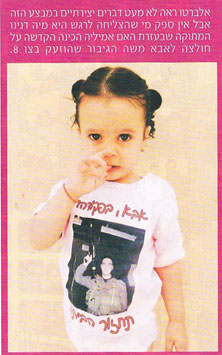 Infiltrators have come up through tunnels in to Israel for a second time; killing five solders before one of then was eradicated and the other four made their way back into their tunnel.

People in Sderot as well as the surrounding area once felt a certain level of safety in their home, but that is gone today, knowing that Hamas terrorists can pop up anywhere in the areas that boarded Gaza.

In our last update from Sderot we told you about Moshe and that his reserve unit was called up to report for duty. This picture appeared in this week’s Sderot Newspaper. It is of his daughter wearing a shirt with her daddy’s picture on it and caption is her ordering her hero daddy to come home.

It captured the heart of the newspaper publisher and mine as well. Many families spent this Shabbat with an empty chair at the table and forty families will never see their loved ones at the Shabbat table again.