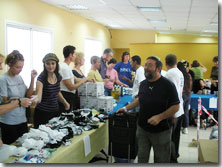 This past Wednesday was the culmination of a busy week of work as we prepared for the “Day of Blessings”. Three hundred tickets were printed and given out to those we support as well as others in the community that need a helping hand to make ends meet. With all the food and household items delivered, all we were waiting on were the volunteers from The Joshua Fund and the clock to strike 9:30.
After instructing the first bus load of fifty volunteers on what to do if they heard ‘Tseva Adom” and where to go in case of a Kassam attack, we opened the gates and let our guests in to be blessed, and blessed they were.
As our guests came in they were greeted with smiles and hugs and even, coffee, tea or juice if they wished. They all received a new cart full of basic food items… flour, salt, sugar, canned vegetables, tuna, coffee, olives, pickles and the list goes on. They were also given personal hygiene items as well. Just a side note… deodorant here in Israel cost 28 shekels (about $7). You can buy a whole chicken for the same price and be able to feed your family. A new electric water pot, or comcoms as they are called here, which are used for making tea or coffee were also given as well as kitchen towels and a new five piece bowl set. To get it all home, everyone who came also received a two wheel shopping cart and a bus pass with ten one way trips on it for anywhere in Sderot.
The gifts were not the only blessing of the day though. The people of Sderot got to meet the people that love and support them through The Joshua Fund, and the donors of The Joshua Fund got to meet the people they help support and see where their gifts go. They also experienced being in Sderot and now when they read about Sderot it will be more than just a word in a news story.
The second bus arrived in time to continue the “Day of Blessings” at 2:00 and they continued where the first group left off. The blessings continued to roll out the door until 6:30 that night. Out of the three hundred tickets given out two hundred and eighty six came that day. For the fourteen carts left we had a list of people that were willing to come back at 6:30 that night to pick them up.
With the building emptied of items, the floor swept, we all sat down and praise G-D for a wonderful day.