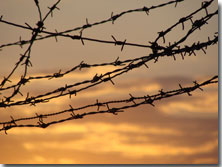 At least 15 Kassam rockets and mortar shells struck Israel on Sunday. One rocket landed between two kindergartens in the Eshkol region, one struck Sderot, two others hit open areas nearby and a fourth hit the Sdot Negev region.

On Saturday, a Grad rocket fired from northern Gaza hit an open area near a kibbutz in the Ashkelon area. On Thursday, a rocket was fired at the Sha’ar Hanegev region and on Wednesday, one landed in the Eshkol region. There were no reports of casualties or damage in any of the attacks.

Rederick seems to be flying more than Kassams and tank rounds. As the Israeli Air Force (IAF) is making air strikes on Hamas launch sites, Hamas fires threats at Israel. This ongoing war has two fronts, the physical war and the war of words.

As I read one threat after another from both sides, I can only think of the scripture in Proverbs that says… ”A soft answer turns away wrath, but a harsh word stirs up anger.” Proverbs 15:1

I believe with my whole heart that Israel needs to respond to the atrocities that are being inflicted on her people by Hamas terrorists and has every right to do so; let there be no mistake about that. I don’t believe that there is one country on the face of this earth that would not respond any differently. But just maybe Israel should “Walk softly and carry a big stick”. Maybe a stick the size of the rod Moses carried.

As we possibly enter into an eighteen month cease fire between Hamas and Israel, all is pretty much quiet in Sderot, and we hope and pray it will stay that way. When you look at the past track record, our fear of giving Hamas eighteen months with open border crossings to re-arm, re-stock and re-train for a future day to strike is once again raised.