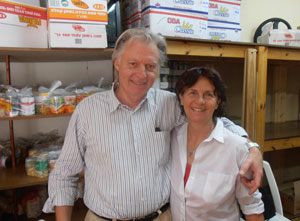 Back in June of this year, I posted a documentary entitled “Rocket City”. We were graciously given the permission to post and us it by Mark and Ruth the producers of it. I my estimation it is probably the best documentary done about the reality of life in Sderot.

Today I had the opportunity and privilege to meet Mark and Ruth here in Sderot. There isn’t any place I could take then to see the reality of life in Sderot because they have already been on a reality tour of Sderot.

We spent the morning sitting and talking about the reality of Sderot and how nothing has really changed since they filmed “Rocket City” except for the new realities such as terrorist tunnels and now the possibility of a knife, axe or car attack which has now been added to our plate.

If you have not seen “Rocket City” it is well worth your time if you would like to know the reality of life in Sderot. You can view it by clicking here.