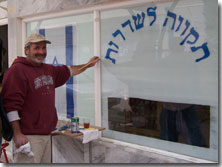 Gershon was our very first volunteer to come. He came with a construction background at a time when we needed the help the most. He was able to take on any task asked of him as we had just acquired our Moxson and had miles to go before it would be ready to open its door.

He was here for the end of the cease fire and the war of December 2009 in Gaza. In spite of the daily rocket attacks he spent every day, building, plumbing or painting. There is not a day that goes by that he is not remembered as there are so many projects in the moxson he worked on. Now Hope For Sderot through His eyes…

“I was already in Israel, 9000 miles from my home in Southern Illinois, when I bumped into Stewart at a hardware store in Sderot last year. I attended a presentation a couple of years earlier at our local state university given by an Israeli reporter from channel 2 by the name of Sagi Basham. I promised myself to come and volunteer there someday.

My entire three month trip was designated to be spent volunteering at different NGO’s throughout Israel, but my other original contact person for Sderot really was not prepared, so meeting Stewart there at that moment was pure hashgocha pretis (divine providence).

I had the right skills, even brought some hand tools and I was able to plug in to the projects at hand. Oh and btw I saw Sagi on the street while I was there during the Gaza conflict. 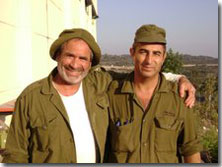 Volunteering actually gives one a sense of self-worth at least as great as what one actually is able to accomplish.”

Not only did he come and volunteer but he also left his tools for us to have and use. Personally I would like to think that they are on loan and that he will make his way back here some day.