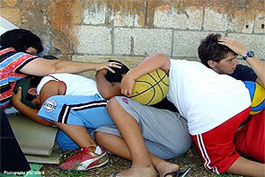 Rescue services reported a “massive” cross-border Kassam barrage on Wednesday, with three of the rockets landing in the western Negev, damaging several greenhouses.

The IDF said at least 20 rockets were fired from the Strip.

The bombardment which came after a night on which three soldiers were wounded by a mortar shell fired by Palestinians during IDF operations in southern Gaza.

Two of the soldiers were in moderate condition while the third was lightly hurt. They were evacuated by helicopter to Soroka Hospital in Beersheba.

According to Palestinian reports, six Palestinian gunmen were reported dead in what was the first armed confrontation with the IDF since the cease-fire took effect in June.

Five of the gunmen were reportedly killed in two IAF strikes south of Khan Yunis, which the army said were carried out against mortar shell launchers.

It came after several mortar shells were fired toward the Eshkol region, one which landed on the Israeli side of the Kissufim crossing.

Taher Nunu, a Hamas spokesman, said the group considered the airstrike a violation of the truce.

“This is a serious breach of the truce understandings reached through Egyptian mediation,” he said in an e-mail message to reporters. “We consider this the most serious in a string of breaches.”

Earlier Tuesday night, IDF special forces entered Gaza in order to blow up a tunnel dug by Hamas terrorists for the purpose of kidnapping IDF soldiers.

Troops engaged Hamas gunmen in a firefight, during which a soldier was lightly wounded, the IDF said, adding that there were also casualties among the gunmen.

During the course of the fighting, terrorists blew up a house in which the tunnel surfaced, an explosion which testified to a “large amount of explosives,” a military source said.

The Home Front Command has taken steps to prepare for the possibility of an escalation, the IDF said, but stressed that the forces were carrying out “a pinpoint operation” which was not aimed at harming the ceasefire.

A military source said the attack tunnel was ready for “imminent use,” describing it as a “ticking tunnel” for the purpose of kidnapping soldiers.

The IDF accused Hamas of jeopardizing the truce by digging the tunnel and plotting to abduct more Israeli soldiers in the immediate future.

“The tunnel we uncovered was ready for imminent use, forcing us to act immediately,” the military source said. “We did not know where the other end of the tunnel surfaced. In light of the intelligence we received about its immediate use, plans for special forces to enter Gaza this evening after sundown were approved,” he added.

“The operation will end tonight and soldiers will head back to Israeli territory,” the source added. “We are committed to the ceasefire, but we saw an immediate threat of kidnapping. Hamas placed the ceasefire in jeopardy. We can’t ignore a red warning light of a kidnapping attack.”

Asked if he believed the cease-fire had ended, the military source told The Jerusalem Post, “I don’t think there’s any reason for this to happen. We are doing what needs to be done. But if other side forces us, we will take further steps.”

Residents identified the man as a Hamas gunman.

Abu Obeida, a spokesman for Hamas’s military wing, said in a text message to reporters that Hamas troops were engaged in a gunfight with Israeli forces in central Gaza.

“Our response will be harsh, and the enemy will play a heavy price,” Hamas said in a statement on its military wing’s Web site.

Since the cease-fire went into effect in June, Hamas has dug an unknown number of tunnels to facilitate future attacks on Israel and to import large quantities of weapons from Sinai. The tunnels are seen as viewed as central to Hamas’s terrorist infrastructure in the Strip.