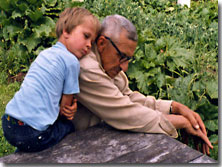 There is a group of people living in Sderot, that when they hear “Tseva Adom the fifteen second warning is just not enough. I am talking about the elderly, the hearing impaired and the disabled.

Many of the elderly us canes to help them get around and keep them a bit more steady on their feet, but how fast can a eighty five year old person move, can they even make it across the street in fifteen seconds? Of those fifteen seconds how many of them does it take for them just to hear it, no less get up.

I remember my mother, who at eighty four was hard of hearing and sometimes it would take two tries to get up from the couch. There is no way she could ever have made it out here front door and into the bomb shelter, it just wasn’t going to happen.

I have a friend that lost part of her right leg and another who lost his right foot. At three o’clock in the morning, out of a sound sleep you need to find your crutches and make your way to a safe room in the house. For me my safe room is the room where the toilet is because there are three walls between you and the outside, although the roof is only half as thick as it needs to be to stop a Kassam.

The fifteen seconds are nice and for the able bodied we can at least make an attempt to make it to safety but here in Sderot not all are that fortunate.