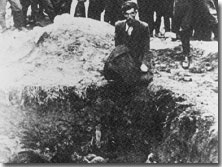 For centuries, we lived in Berdichev. In the brutal Ukrainian winter of 1941, SS* soldiers arrived there and rounded up eighty-seven members of my family – babies, young adults, octogenarians – stripped them naked, marched them to a nearby ditch, and executed them. Their lifeless bodies fell silently into a mass grave.

Like most Jews in Europe, my family “cooperated” with the Final solution. They did not resist or fight back. Six million Jews were slaughtered in a period of four years. They received little sympathy
while they were still alive and hunted down like animals. There was no public out cry because the Holocaust fit the world’s narrative for Jews during the past 2000 years: a people destined to be persecuted and slaughtered.

During their two millennia in the Diaspora, Jews were not known to resist. There are few recorded instances in which Jews turned against their host nations or retaliated against their murderers. Instead, the survivors – if there were any – were expelled or left for another place.

The murdered were regarded as “good” Jews. They accepted their fate helplessly, without resistance. This narrative of the Jews has played out on the historical stage with boring monotony: Jews get killed because they are Jews. Nothing novel about it. After the Holocaust; however, the world, disgusted by this particularly ghoulish period of history, accorded some sympathy for the Jews.

Media commentary about the ongoing Gaza War reveals the world has now reverted to its pre-Holocaust perspective. Today, the only good Jew is a powerless Jew willing to become a dead one. The Zionist Revolution is to blame. It changed everything. Jews re-created their own country. The Arabs attacked the new Jewish state the day after independence and promised to complete Hitler’s genocide. In succeeding decades, the Arabs attacked again and again. Strangely, the Jews, many of them refugees from Arab nations, adopted a surprising, new tactic: they fought back.

With Zionism, the Jews stubbornly refused to follow the centuries-old script. They refuse to be killed without resistance. As a result, the world has become increasingly enraged at their impertinence.

The recent events in Gaza and Mumbai make this plain. In 2005, Israel eliminated all Jewish presence in Gaza making it “Judenrein,” and handed it over to the Palestinians. Left behind were synagogues and thriving green houses. The Arabs looted and destroyed them literally the day after Israel ‘s withdrawal was complete. Where these structures once stood, the Palestinians built military bases and installed rocket launchers to shell Israeli civilians. To date, some 7,000 missiles have fallen on Israeli cities and towns, killing and maiming dozens, and sowing widespread terror. Medical studies reveal nearly all Jewish children in the communities bordering Gaza suffer from serious, trauma-induced illness.

The Gazan Palestinians then elected Hamas to lead them. Hamas proceeded to kill or imprison their political rivals, and its leaders, true to the Hamas charter, were unabashed in clearly stating their aims: they will not stop until they achieve their Final Solution, kill all the Jews, take over the land of Israel, and establish a theocracy governed by Islamic law.

As killing Jews for being Jews has been a national sport for centuries, Islamic militants are justified in believing they are merely fulfilling historical tradition in Argentina , India and Gaza . Surely the Jews in Mumbai did not occupy Gaza . They were tortured and killed just for being Jews. And predictably, in the eyes of the world, they immediately became good Jews, just like my murdered family in Berdichev.

Good Jews would wait until Hamas has weapons enabling its members to achieve their ultimate goal of absolute mass murder. Those enraged by Israel ‘s defensive military action insist Hamas uses only “crude” rockets, as if Kassams were BB guns, and military inferiority were somehow equivalent with moral superiority. In fact, Hamas now has Iranian-supplied Grad missiles which have landed on Be’er Sheva and the outskirts of Tel Aviv.

Westerners have had only sporadic exposure to the indiscriminant killing in the name of “holy war” which Israel has lived with for years.

Memories of 9-11, Madrid , and London have dimmed. This is not because the Islamic militants made a careful choice of weapons. They simply have not yet acquired nuclear bombs. Once they do, the West will develop a less detached view about the Islamists’ professed intentions for the “infidels.”

The only enlightened people in the civilized world who actually get it are the Israelis. They’ve not had time for detached philosophical ponderings. They’ve been too busy confronting the reality of Islamic fundamentalism.

Soon, Iran will have nuclear weapons. It will give them to Hezbollah and Hamas. Today, Jews must take a position: either be “good” Jews willing to be slaughtered without resistance, or be “bad” Jews who defend themselves at the cost of being pariahs of our enlightened world. Good Jews would wait for another six million to be murdered, and pick up to leave for another country to start the cycle again. The bad ones refuse to go calmly into the ditch.