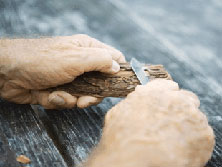 Remember the Abbot and Costello skit, “Who’s on First”? “Who” is on first, “What” is on second and “I don’t know” is on third. I feel like Abbot sometime when I sit and read the news. I listen to the political leaders of this world as they sit and carve up Israel as if they had a stick of wood and a pocket knife.

It boggles my mind that a professing Christian President and a practicing Jewish Prime Minister can consider dividing a land that belongs to G-D and has been given to the Jewish people. I have to stop and wonder what version of the Bible or the Tanakh they are reading.

In this “progressive” world we live in today, I guess it is just natural to think G-D is progressive as well, and the things He spoke thousands of years ago simply don’t apply for us today. If that were the case G-D would have a lot of apologizing to do to different nations and individuals.

We need to get a few things straight in our thinking … “Thus says the L-RD, the King of Israel, And his Redeemer, the L-RD of hosts: ‘I am the First and I am the Last; Besides Me there is no God; (Isa 44:6) and second; “For I am the L-RD, I do not change; Therefore you are not consumed, O sons of Jacob. (Mal 3:6)

Case in point…Just because the state of New York recently chose to acknowledge same sex union and will marry same sex couples it is not and will never be right in the sight of G-D , I don’t care what you think , do or say; it is wrong in the sight of G-D. “Would you indeed annul My judgment? Would you condemn Me that you may be justified? (Job 40:8)

Baruch Ha’shem, HE NEVER CHANGES He is the one and only that we can be certain to know where we stand with Him in regards to our relationship with Him and on every matter of right and wrong, because… He never changes.

So why then Mr. President, Mr. Prime Minister and World Leaders, you think that it is O.K. to divide the land? G-D hasn’t changed His promises to Abraham, Isaac or Jacob. The land belongs to G-D and has been given by Him to the Jewish people. “For I am the L-RD, I do not change”.