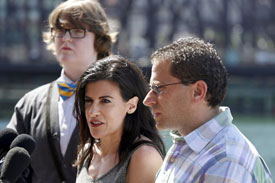 As I sat the other night and listened to three of the survivors of the Boston Marathon bombing speaking of their injuries, I could relate to everything they were saying … Lynn Julian talked about her sense of security taken away, how she is in constant pain and fear and how her life has been changed forever and she is now suffering  PTSD.

Scott Weisberg spoke of the injuries he has sustained, injuries  you can’t see from the outside, in fact, he   looks quite normal yet he suffers from a brain injurie and  hearing loss. He told reporters how he and the other survivors now suffer from PTSD. He expressed the constant fear and anxiety he lives with since the terrorist attack and how he will live with the reality of what he went through for the rest of his life.

Henry Borgard put it this way “The past two years have been hell… no words could ever do justice to the atrocities the Tsarnaev brothers committed… I still wake up screaming sometimes from nightmares”. Today he has a service dog to help him get through his PTSD.

Then there are the three spectators that were killed in the bombing: Krystle Marie Campbell, 29, Lu Lingzi  23, and Martin William Richard, 8. You have the two police officers who were killed MIT Police Officer Sean A. Collier, 27, and  Boston Police Officer Dennis Simmonds. 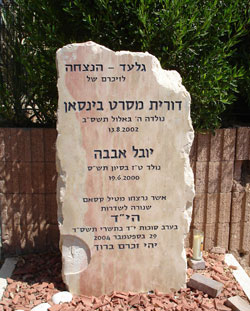 I say Sderot has a lot in common with Boston because everything these people, this town has gone through, the people of Sderot have gone through and have experienced continuously over the past 15 years. We are still faced with more terrorist attacks in the future.

Unfortunately there are not enough service dogs to go around for all those who suffer PTSD like Mr. Borgard.  The PTSD Ms. Julian and Mr. Weisberg both spoke about and how it  affecting them as well as  the other 264 plus victims, also affect the population of Sderot… 19,000 victims.

It is that same terrorist mentality that has caused the loss of limbs and having to live with the physical scars and disabilities on their bodies, as an ever present reminder  for the rest of their lives. This horrible, horrible atrocity was been brought on   innocent men, woman and children of no fault of their own in both towns.

What has happened in Sderot in no way diminishes what the people of Boston have had to go through but rather bonds the two cities by a vicious acts of terror has brought out a strength that says we will not to give up or to give in. 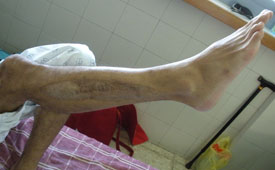 Boston and Sderot have been changed forever, yet…Boston is standing strong and Sderot will not be moved, yet there are those in each town that need help and understandably so.

Hope For Sderot is here to help those who for one reason or another are having a hard time coping with the situation; remember we still live with the daily threat of another terrorist attack at any second.

Weather it is with food, diapers, sandwiches for school children or when able, to help with a utility bill or a medical bill, we are here to help in any way we can.

It is through your generosity that makes this possible. We could really, really, really, use your help now. Would you consider becoming a monthly donor? If we had 2000 people all willing to get involved on a monthly basis ($5-$10) our doors would never be closed. The price of a trip to McDonalds or Starbucks once a week would make all the difference in the world to us. Will you consider helping us help those who have been the victims of the past 15 years of unending terrorist attack? Please say yes by clicking here.