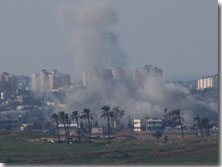 This was another relatively calm week in Sderot. We are still having daily rocket attacks from the Hamas terrorists but not as many. Yesterday a house was hit by a Kassam just a block and a half from where we were celebrating Afeek’s Bar Mitzvah. The synagogue where Afeek read his first Torah portion is a converted bomb shelter. As morning prayers began, there were two “Tseva Adom” warnings. In spite of them, not a beat of the Bar Mitzvah was missed; however, they did bring a few more people in to morning prayer as people sought cover.

Artillery fire from Israel is still in the mornings, afternoons and through out the
the night, in response to the Hamas not willing to stop their attacks on innocent men, woman and children in Israel. Thick black smoke is still rising from Gaza. As I looked at Gaza yesterday, from my vantage point, all you could see was this black covering of smoke.  All I could think was they are having a dark day there. In contrast to Gaza, the sun was shining here in Sderot.

“There are talks of a cease fire but I’m not sure how that will be worked out in as much as we have an eight year track record of Hamas cease firers. In each and every case Kassams were still being fired and they took the opportunity to train new troops, build up their arsenals, dig new tunnels and smuggle in new weapons. Why will this cease fire be any different, we will just have to wait and see how this plays out” Avagador Avshalom said yesterday.

On Wednesday, we received our first shipment of food for distribution to those injured by Kassams and to those who are in desperate need due to the situation here in Sderot. This shipment of food was paid for entirely by The Joshua Fund.  Their desire is to bless the people of Israel, especially those here in Sderot who have been effected by Hamas terrorism. We are thankful for their unconditional love and support. We are going through applications now and hope to have out first food distribution some time this coming week.

We have met some wonderful people here who are helping different sectors of the population here in Sderot. Two of these people are Marko and Gabi , there stories are featured on the web site in “projects” category and you can read about them by clicking here.

We covet your prayers and appreciate your support as we help those who have been injured, Thank you! May G-D bless you as you hear His heart and His call as you stand with us and His people here in Sderot.