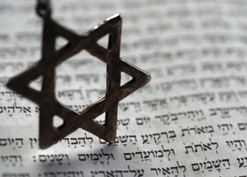 It’s pretty serious stuff. Reminds me of the fifth commandment, “Honor your father and your mother so your life will be long.” Guess what? If you don’t honor your father and your mother, the reverse is true. Your life will be short. Who are the fathers? Abraham, Isaac, and Jacob. Has the Church honored the fathers of the faith? I read the people that are called the Church Fathers. I read what they had to say about the Jewish people. You know what? The Encyclopedia Judaica says, short of the gas ovens, the whole holocaust plan was spoken by those called Church Fathers. They had such a hatred for the Jew.

Martin Luther, you may not know this, but if you read his statements, probably the most anti-Jewish statements you’ll ever read in your life. I wondered how a man that could do so much good in the kingdom of God could also do so much evil. Then I got my answer reading a book on the Father’s Love. I found a quote from Martin Luther. I’m quoting Martin Luther, he said, “I have difficulty praying the Lord’s Prayer, because whenever I say, ‘Our Father,’ I think of my own father who was hard, unyielding and relentless. I cannot help but think of God that way.” He had a problem with his own father – hard, relentless – and it blinded him.