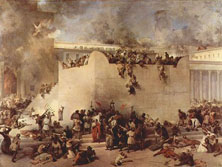 9/11 needs no explanation. We all know it is the day when thousands of people were killed and injured. No further explanation is needed to explain the horrendous enormity of the day. In the same way, there is a date in the Hebrew calendar which also has the same enormity of tragedy in the lives of Jewish people. “Tisha B’Av” refers to the 9th day of the eleventh month in the Hebrew calendar. This year it falls on 20 July.

On that date, in 1310 B.C.E., G-D decreed on the generation that left Egypt that they would not be allowed to enter the Land of Israel. This was because the spies who had entered the Promised Land reported back that “we are like grasshoppers”, and therefore the people lost heart and faith.

In 421 B.C.E., the first Temple, the temple Solomon built in Jerusalem, was destroyed by Nebuchadnezzar, the King of Babylon. In 69 C.E., the second Temple in Jerusalem, which stood for 420 years, was destroyed by Titus. In 133 C.E., the city of Beitar fell when the Roman Emperor Hadrian crushed the Bar-Kochba rebellion, the final attempt to regain independence from Roman rule. In 133 C.E., the Temple Mount was leveled and a temple to Jupiter was erected in its place.

The Sages established a number of observances to mark this tragic day. During this three-week period, weddings and other parties are not permitted, and people refrain from cutting their hair. From the first to the ninth of Av, it is customary to refrain from eating meat or drinking wine (except on the Shabbat) and from wearing new clothing.

The restrictions on Tisha B’Av are similar to those of Yom Kippur: In synagogue, the book of Lamentations is read and mourning prayers are recited. The ark (the cabinet in which the Torah is kept) is draped in black. People refrain from washing, bathing, shaving or wearing cosmetics; wearing leather shoes; engaging in sexual relations; and studying Torah.

Many of the traditional mourning practices are observed: people refrain from smiles, laughter and idle conversation, and sit on low stools.Tish B’Av, a time of mourning, lamenting and reflecting.