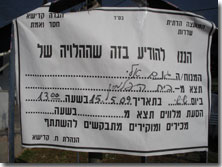 The two month long silence from “Tseva Adom” and Kassams was broken last week. In the late afternoon on Tuesday, May 19, around five P.M., “Tseva Adom” sounded. The alarm came as one of our Sderot volunteers was “Sitting Shiva”; her father passed away just a few days earlier.

As they “sat” and the alarm was sounded. There was chaos at the home, a home that has no bomb shelter near it and only a red tile roof; the very worst roof a home here in Sderot could have for protection from a kassam. The kassam landed just three houses away with a hellacious boom,
rattling the house and causing most of the family to scream hysterically.

One of our volunteers was there consoling the family at the time. She came to the side of the trembling 69 year old widow, Daisy. When we heard the kassam explode, Daisy fainted. Bobbi Anne was able to help her from falling and got her back to her seat. “She saved my mother’s life”, Etti told me. She would have passed out and fallen if Bobbi Anne was not there to help her.” Paramedics came and she was treated for shock.

The kassam was enough to remind us (as if we need the reminding) to stay alert and to pay attention to our surroundings. Meanwhile, there is still no formal “cease fire” and the rhetoric is flying as usually. The IAF just finished a four day training exercise. The scenario was “Israel being attacked from the north, south and east all at the same time”. The Home Front command will be conducting a five-day drill next week, dubbed “Turning Point 3”, which will send Israelis running for their bomb shelters on June 2.

Deputy Defense Minister Matan Vilna’i said Thursday. “The Syrians and Hizbullah have missiles that can reach any city in Israel, including in the Negev, and Israel needs to prepare for scenarios during which hundreds of rockets will hit the home front. Every person needs to know that there is a chance that at a time of war, a missile might land in their backyard.”

Deputy Defense Minister Matan Vilna’i told the Knesset’s Foreign Affairs and Defense Committee on Monday, “This isn’t an imaginary situation. This isn’t detached from reality and if there is a war, it’s very likely that this is what will happen.”