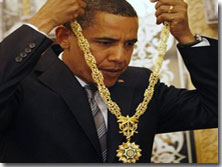 It was quiet once again here in Sderot. During the Home Front Commands training exercise here in Israel this week, there were no air raid sirens sounded in Sderot. They felt we have had our share of running to bomb shelters and don’t need practice.
The exercise “Turning Point 3” was concluded on Thursday of this week. For the first time in such an exercise, the IDF Home Front Command tested a new system that issues a warning of incoming missile attacks to private cell phones. This system enables a warning to be sent to the entire country or just to several city blocks where the missile is predicted to land. The IDF is also reviewing technology that would enable it to send little “pop-up” screens to computers that are connected to the Internet.
Also on Thursday, President Obama gave his speech at Cairo University. Obama is very popular in Egypt, and being the youngest-ever U.S. president and of African descent, some Egyptians can’t help but see a clear resemblance to King Tuthankhumen. President Barack Obama was given a gift, a gold necklace called the King Abdul Aziz Order of Merit, the country’s highest honor. Comment on what the president said… no all you have to do is read your Tanakh or your Bible to see how this will all play out. O.K maybe just one thought…

The hope of Israel, as with the hope of Sderot, is not in the United States, the IDF or any other world power. Our only hope is found in The G-D of Abraham, Isaac and Jacob, the one who made the promises to Israel, cut covenant with Abraham and who will keep His word, no matter how many verses you can quote from the Koran.
In other news, Israel was ranked the fourth most dangerous country in the world despite the improvement in its security. The Jewish state is followed by only Somalia, Afghanistan and Iraq.