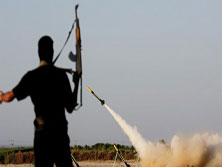 It has been a while since the last news article, thing had been relatively quiet. With peace talks in the works and terrorists wanting to shoot them down them before they get off the ground, thing are starting to pick up, to escalate, old wounds reopened, “Tseva Adom” sounding again.

As terrorist attacks escalate we are once again running for our bomb shelters or safe rooms. The current escalation has seen an increase in Kassam and mortar attacks on Sderot and the surrounding areas from the Hamas controlled Gaza strip.

Since the “peace talks” have started there has been an average of one terrorist attack a day. This week alone there were three Kassams fired on Sunday and we had a wake up call to “Tseva Adom” this morning at 5:40 a.m.

Since the fourth of September there have been 20 rockets or mortars’ fired from Gaza toward Sderot and its surrounding cities. In the latest attack two of those rockets had white phosphorous in them; a chemical that if it gets on your skin will burn all the way to the bone. White phosphorous is one of those compounds that the UN has ruled as being illegal to use against civilian populations.

By the grace of G-D, this latest round of Kassam rocket and mortars to hit Sderot has not caused any physical injuries; they have however reopened those mental wounds. To show the grace of G-D and His protective hand; on Wednesday morning last week a mortar exploded near a kindergarten, damaging the building just minutes before the children were scheduled to arrive. Had the attack happened just a few minutes later it would have been a different story.

Whether Hamas or one of the half-dozen al-Qaeda-inspired organizations operating in Gaza are responsible it remains uncertain. Israel holds Hamas responsible though for all rocket and mortar attacks as they are the ruling authority.

In response to the recent rocket and mortar attacks Israel has launched a series of retaliatory air strikes. Israel also mounted air strikes in the north and in the southern border city of Rafah, targeting a smuggling tunnel.

On Sunday September 26th, Israel’s 10 month freeze on construction is scheduled to end. Palestinian President Mahmoud Abbas is warning that if the construction freeze is not extended, he will once again pull out of peace negotiations. Israeli Prime Minister Benjamin Netanyahu shows no sign of agreeing to an extension of the building freeze.

How will this all play out, how will Hamas and the terrorists in the Gaza Strip react if building once again resumes? For the answers to those questions I guess we will have to wait and see.